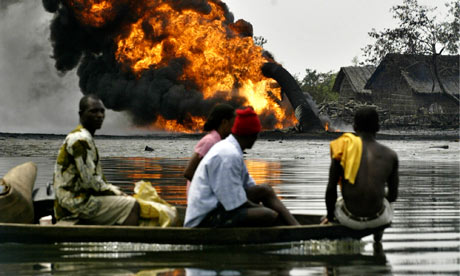 Executive Director of the group, Godwin Ojo, who made this known in Port Harcourt, the Rivers State capital, pointed out that on the eve of the one-year anniversary of the release of the UNEP assessment on Ogoniland the Nigerian government hurriedly announced the formation of HYPREP.

According to him, ”HYPREP has been awarding so-called clean up contracts that cannot be verified. HYPREP seems to usurp the responsibility of NOSDRA causing inter-agency wrangling and conflict that undermines environmental protection.”

The ERA boss was speaking during the second training on investigative journalism  organized for Nigerian journalists by his group, and partner, VIKES, the Finnish Foundation for Media Communication and Development.

The training which however, held September 17-18, was to share knowledge about local, national and global environmental issues, examined challenges facing investigative environmental reporting while exploring strategies for improving the practice.

Participants were drawn from print and electronic media organizations from Rivers and Bayelsa State, while the facilitators included three journalists (two from Nigeria and one from Finland).

ERA’s Head of Media, Philip Jakpor in his opening remarks said the idea of the media training on investigative environmental reporting conceived in 2011 is to coach Nigerian journalists on basic steps in investigation, while buoying efforts to bring to the front burner of national discuss, the environmental issues that confront Nigeria as a nation and the globe.

Continuing, he said that in relation to investigation on the state of the environment, the journalist has to be aware that there are various environmental problems which directly threaten livelihoods sources and quality of life. He noted that that most investigative reports are low quality in terms of knowledge about core environmental issues and their political, economic and socio-cultural contests hence the need for them to hone home their research skills and information gathering techniques.

Some of the issues ERA identified that are under-investigated or unreported are: the impending Water stress and scarcity, lowering farm yields, hunger and poverty, weak resilience due to inadequate infrastructure, coping mechanisms and adaptation measures associated with Climate change.

The group also pin-pointed some issues such as deforestation that is contributing to global warming and biodiversity loss. From the rate of deforestation published by the Food and Agriculture Organisation (FAO) data Nigeria forest loss of about 3.5% of her forest cover amounts to about 350,000 -400,000 loss per annual and this is increasing scarcity for farmlands with implications for food production and poverty.

Another area they identified is the desertification challenges in the Northern Nigerian states of Bauchi, Borno, Jigawa, Kano, Katsina, Kebbi, Sokoto, Yobe and Zamfara and the fact that most journalists have not bothered to visit any of the affected states to see first-hand what desertification has wrought on communities and local livelihoods.

The organization went on to say that in the Niger Delta, aside the oil pollution, many journalists do not know that on the eve of the one-year anniversary of the release of the UNEP assessment on Ogoniland the central government hurriedly announced the formation of HYPREP which they insisted, has been awarding spurious clean up contracts that cannot be verified.

Other speakers at the event were Wale Fatade of Media Support Center, Tunde Akanni of Lagos State University, and Hanna Nikannen an investigative journalist from Finland.

Journalists who were part of the training were: Precious Dikehowa of The Nation, Blessing Ibunge of National Network, and Uche Brown of FUB Global Network. Others were Anayo Onukwugha of Leadership Newspaper and Ebiowei Lawal of IzonLink.