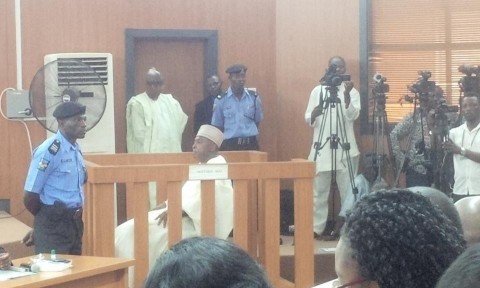 ABUJA, NIGERIA (AFRICAN EXAMINER) – The second prosecution witness and an official of the Guaranty Trust Bank (GTB) Mr. Amazi Nwachukwu standing in the Senate President Bukola Saraki false assets declaration trial at the Code of Conduct Tribunal (CCT) has given details on how funds were transfered into various account of the accused.

Nwachukwu who as at the period (2009-2012) the senior Lawmaker offshore accounts was funded, was the Head of Transfer Unit and served at the Central Clearing and Foreign Operations of GTB, alleged that Saraki did not declare the foreign accounts to the Code of Conduct Bureau (CCB) while serving as the Kwara State Governor- between 2003 and 2011.

The witness according to The Punch confirmed that Saraki was keeping dollar, pounds sterling and naira accounts domiciled in the Ilorin, Kwara State branch of the GTB.

He alleged that Senate President transferred over $3m from his dollar account to his foreign account during the period.

“The purpose of payment was funding for amounts utilised on AMEX (American Express) cards issued to the customer (dollar credit card no. 374588216836009).

“For his dollar account number 441/441953/2/1/0, the customer signed the fund transfer form. The form was received from the account officer in Ilorin branch. We then processed it and transferred it to our corresponding bank abroad.

“The corresponding bank then transferred it America Express Bank Limited.”

The witness told the court that the transfer was for the “funding for amount utilised on the payment cards issued to Saraki.”

He said Senator Saraki while still in power as the Kwara State Governor transferred the total sum of £1,526,194.53 from his pounds sterling account to his Fortis Bank, London account in three installments within two days on February 15 and 16, 2010.

He alleged that GTB also offered a N375m loan to Saraki through a letter dated February 10, 2010.

Similarly, the witness said Saraki instructed GTB to transfer the pounds sterling equivalent of the loan to fund mortage on a London property.
“In Exhibit 7 is a letter dated February 10, 2010’’ the witness added.

In the 14th out of the 16 counts preferred against the Senate President,

Saraki in the 14th count allegedly failed to declare his interest in “an American Express Service Card with No: 374588216836009 wherein you (Saraki) transferred huges sums of money in dollars from your Guaranty Trust Bank domiciliary account No441441953210 in Nigeria to the American Express Service, Europe, whilst you Executive Governor of Kwara State.”

The offence is said to be

The alleged crime contradicts section 15 of the Code of Conduct Bureau and Tribunal Act, CAP. C15, Laws of the Federation of Nigeria, 2004 and as incorporated under paragraph 11(1) and (2), Part I o the Fifth Schedule to the Constitution.

In the same vein, if found guilty, the alleged offences are punishable under section 23(2) of the CCB/CCT as incorporated under paragraph 18, Part I of the Fifth Schedule to the Constitution.

The witness is being led in evidence by the first prosecuting counsel, Mr. Rotimi Jacobs (SAN). He has previously led his first witness Mr. Michael Wetkas of the Economic and Financial Crimes Commission (EFCC) on the same trial in 2016.