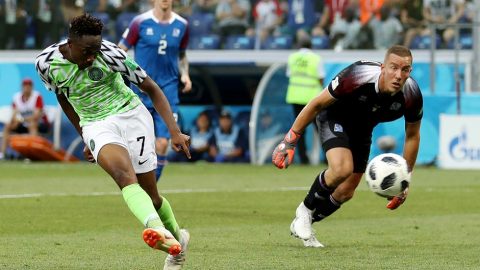 (AFRICAN EXAMINER) – The Super Eagles of Nigeria Friday recorded a shocking but impressive victory in the ongoing FIFA 2018 world cup in Russia, after a lackey first half in their encounter with the Iceland but returned better, stronger and beat their opponent 2-0.

The Nigerian fans and supporters’ call on the Coach Gernot Rohr to start Ahmed Musa in the cracker eventually paid off as the Leicester City forward and left winger scored the two goals.

The Iceland however lost the chance of netting in a goal as they secured a penalty, but the midfielder Gylfi Sigurdsson lost the opportunity.

With the Friday outcome, the Super Eagles are second in their group D with three points – now look most likely to make the Russia World Cup last 16

The Super Eagles last match against Argentina is slated for Tuesday, June 26, at 7pm local time.