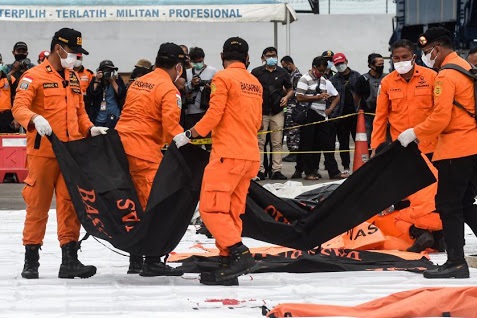 (AFRICAN EXAMINER) – The family of a flight attendant who was the first victim to be identified after last week’s crash of an Indonesian passenger jet is preparing to bury his remains on Thursday.

Police identified Okky Bisma, 29, as a victim of Saturday’s crash of a Sriwijaya Air Boeing 737-500 after matching his fingerprints with ones found in government records on Monday.

“He will be buried today,” said the victim’s father, Supeno Kiswanto.

So far, only six victims of the crash have been identified, national police spokesman Rusdi Hartono said late on Wednesday.

Investigators are hopeful that data from the recorders can help them determine why the aircraft plummeted into the Java Sea four minutes after taking off from Jakarta airport with 62 people on board.

The domestic flight had been en-route to Pontianak on Borneo island in what was supposed to be a 90-minute journey.

Police said late Tuesday that they had so far identified four victims of the crash – two crew members and two passengers.

The Transportation Ministry said that the aircraft had undergone inspections for airworthiness before the crash.