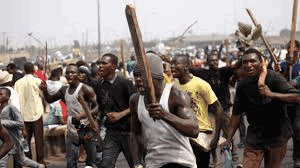 From Ignatius Okpara, Enugu – Authorities of the Federal Neuropsychiatric Hospital, Enugu (FNHE) has debunked claims by protesting aggrieved union members in the hospital that it used suspected thugs and the police to disrupt a violent demonstration staged by the workers last Thursday.

The hospital also denied that the Chairman of the Joint Health Workers Union, JOHESU Mr. Alozie Ejimadu, who led the protest, was attacked with an axe, describing the allegation as a political gimmick to gain cheap popularity.

FNEH, in a press statement made available to African Examiner on Sunday in Enugu, signed by a Director in the hospital, Mr. I. S. Ebi, said “at about 5am on 4th June 2015, Mr. Alozie Ejimadu, a suspended nurse in the hospital in collaboration with two other suspended staff, locked the gate of the hospital from outside with chains so that both patients and staff of the hospital could neither leave nor go into the facility on the pretext of strike action”.

African Examiner reports that the aggrieved union members, had embarked on a violent protest last week over the suspension of some of their colleagues by the hospital management.

“Some staff of the hospital who did not understand why Mr. Alozie Ejimadu, could do that, tried to open the gate to enable patients and staff access to the hospital.

“Confusion ensued, because Mr. Alozie and his suspended colleagues tried to prevent opening of the locked gate. Mr. Alozie, Mr. Tony Ozurumba and their cohorts engaged the staffs that were trying to open the gate in fighting with stones and weapons.

“Eventually, the gate was opened when the police came and calmness returned”.

Explaining what actually led to the suspension of some staff, the hospital management disclosed that “Mr. Alozie Ejimadu was suspended for some unethical posting he sent to facebook on high lethal dose he gave to a patient.

According to the management, the Nursing/Midwifery Council had started to investigate him while the whole world is reacting to the facebook post to get a clear picture of the magnitude of this gross misconduct and violation of patient’s rights.

“Mr. Ejike Ihezue without authority used hospital letterheads to authorize issuance of bank loans to Mrs. Perpetua Udegbunam from three different banks namely, Diamond Bank, Ecobank and First Bank Plc. Mr. Ejike Ihezue is neither the Hospital Accountant, the Head of Administration nor the Medical Director and was not directed to issue such letters of authority on behalf of the hospital.

“The banks have written the hospital demanding that they be paid when the beneficiary of the loan Mrs. Perpetua Udegbunam refused to pay. This is a gross misconduct and financial embarrassment to the hospital. In addition, management views the action of the duo as criminal.

Furthermore, he issued a loan of N3million to a terminally ill patient when the patient did not apply for the loan.

“This was a conspiracy with intent to defraud the hospital which he actually succeeded.

“The patient died three weeks after the grant of unsolicited and unauthorized loan, adding that neither Mr. Ejike nor the patient’s relations have repaid the loan till date.

“Mr. Anthony Ozurumba an auditor was suspended because while doing his National Service was still receiving full salary for the service period in the hospital without a break and getting paid also by the hospital.

Most of the misconducts were committed prior to most of the staff assuming positions as labour leaders. Disciplinary processes have equally begun with issuance of queries etc. before now.

” As public servants, they are guided by the Public Service Rules irrespective of their positions as labour leaders in the hospital”.

The statement further noted that “in a letter dated 11th May 2015, with reference FNHE/MD/069/VOL.I/001, the Management had addressed all the issues that bother on the welfare of the workers but they the Union insisted that the suspension order be lifted. But the Management insisted that the matter has been referred to Disciplinary Committee of the Board of Management of the Hospital.

“A seven day ultimatum letter was issued to the Hospital, purportedly from the State JOHESU, titled ‘A SEVEN DAY ULTIMATUM, RE: VICTIMIZATION OF LABOUR LEADERS’.

“The said letter was signed by one Mathias Okonkwo, claiming to be the Chairman of the State JOHESU who the Management discovered has retired from Civil Service years ago and one Benneth Asogwa who led Parklane Hospital to Six Months strike without salary. The management believes that both of them were co-conspirators hired to destabilize the hospital, because there is no state JOHESU.

“We are saying this in view of the fact that in a letter from The University Graduate of Nursing Science Association, FNHE Branch signed by Comrade Nwagwu V.C., the Association disassociated itself from any strike action, noting that the issues at stake are personal, rather than union affairs”.

However, it was gathered that the acting National Secretary of Senior Staff Association of Universities, Teaching Hospitals, Research Institutes and Associated Institutions (SSAUTHRIAI) Comrade J.C. Ugwoke (JP) has advised the Sector President and Sector Secretary to direct the Branch Executive Committee of SSAUTHRIAI at Federal Neuropsychiatric Hospital, Enugu to resume duties immediately.

The union leader equally advised them to adopt and exhaust all internal channels of conflict resolution before embarking on strike.

He sustained the injury during a fracas that ensued at the hospital premises during the protest.

Meanwhile, activities at the hospital had been disrupted since the crisis broke out.