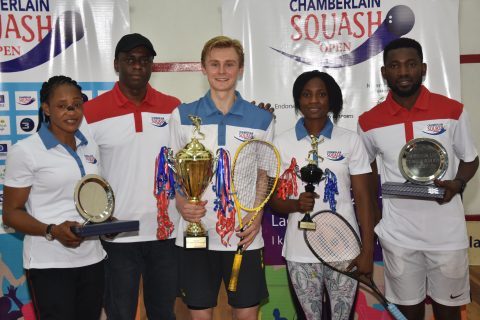 LAGOS, NIGERIA (AFRICAN EXAMINER) – Briton Tom Ford and Nigerian Yemisi Olatunji have emerged the winners at the finals of the maiden edition of Chamberlain Squash Open (CSO) which ended Saturday in Lagos.

The CSO Promoter, Chamberlain Usoh said after the tournament that the world Squash has watched the tournament and declared it was impressed with what they have seen; adding that in the next open, ”we shall see better-ranked players participating.”

Despite the feat, the CSO Promoter stressed that the global acceptability would be considered as a ”yardstick” for the organization to prepare better for the next competition.  While speaking to journalists after the competition, Usoh, a Lagos-based broadcaster, admitted that the experience of organizing the competition was challenging, still declared that he was glad that Nigerians players have garnered more experience, having played with their international counterparts.

He added that the hosting of the tournament offered many intriguing but pleasant experiences opportunities, as a young player defeated another senior opponent, while many Nigerian players at the international scene were discovered.

With the support of the Ministry of Sports, Sports Federation and Media, the CSO Promoter declared that the just concluded Open has given many players the exposure and development they have always desired, just as some of them having been playing, but not known to many people.

He however maintained despite this, CSO has the responsibility to do and achieve more.

On the challenges being faced while the tournament lasted, Usoh said there were, but added they were not really considered as obstacles, rather, means to prompt the organizers on what were needed to do be done differently.

”We need to develop the game and work on how to get more followers”, Usoh asserted.

Besides, the CSO initiator noted that, just like other sports, Squash has its health benefits; therefore, the onus was on the firm to ensure that the public benefits from this, side-by-side with the efforts to be geared towards improving the game in the country.

Usoh who replied that the frequency of the tournament is for now yet to be determined, promised that the organization would scout for better players in the next competition

He urged the Nigerian Squash community to ”keep the hope alive; stay together and ensure all we can, to develop the game” and players.

The Akwa Ibom State Governor Mr. Udom Emmanuel who was represented by Mr. Sam Bassey in his goodwill message, commended the organizer of the Open, and reinforced the South South State’s willingness to host the next edition.

Mr. Owoseni urged other stakeholders to emulate the gesture, as he affirmed that the game has the potentials to productively engage the vibrant youths, as well as reduce the crime rate in the Nigerian society.

The Lagos CP agreed to the assertion that the Open is another approach, in making the game of Squash to become more visible, participatory as well as advancing it to the international standard in Nigeria.

Speaking after the finals, the male winner, Ford said he was pleased to play in Nigeria and gave the Squash standard in the country a pass mark. The young player pointed out that the difference in the game in UK and Nigeria included variance in the courts, also in the fact that Nigerian players ”play hard” and ”fast”.

On her own, Olatunji (the Female category winner) declared she felt great and described the tournament as ”awesome”.

The graduate of Mathematics and Statistics, Federal Polytechnic, Ede, Osun State, who is currently on PSA tour, admitted that the CSO was a ”training competition” for her, adding that after the first round, she ensured that all her subsequent games ended in (3-0). According to her, rigorous training; prayers and fun were the tools of her success.

The star prize according to Ford involved the sum of $1,800.