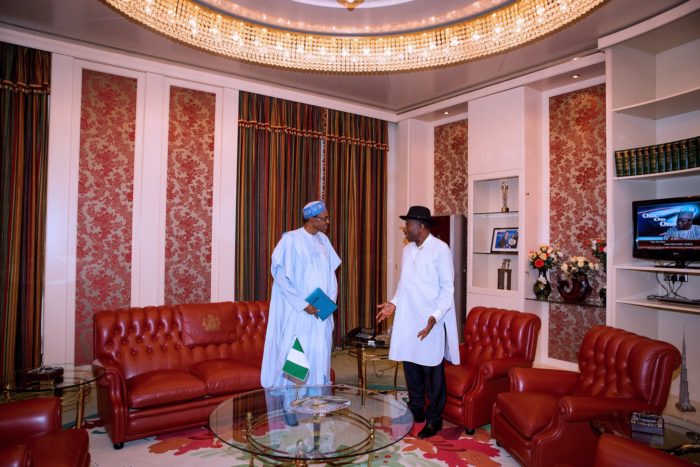 ABUJA, NIGERIA (AFRICAN EXAMINER) – The immediate past President Goodluck Jonathan has again visited his successor, Muhammadu Buhari and had with him, a brief closed door meeting.

While leaving after the closed-door meeting, Jonathan explained to the journalists that his third visit and meeting with President Buhari centred on his previous international missions on behalf of Nigeria, as well as the incoming.

The former Nigerian Leader has just been appointed by the Federal Government (FG) to lead the country’s delegation to monitor incoming Zambian Presidential election.

However, the former President declined questions on the ongoing trials of alleged corrupt practices against some of his party members; aides and cabinet members and other political appointees. He told the State House Correspondents that it would not be proper for him to comment on the matter, since some of them were already before various law courts across the country.

On the raging Niger Delta militancy, Jonathan admitted it was proper for him; other leaders and stakeholders in the region to mediate for peace between the Militants and FG.