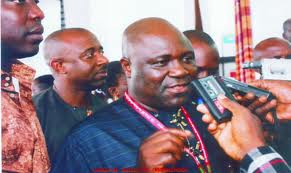 The immediate past Speaker of Rivers State House of Assembly, Hon. Tonye Harry, is dead. He slumped while exercising in a gym this week.

Harry was the Deputy Speaker to Governor Chibuike Amaechi, when he was Speaker in the Rivers House of Assembly.

He represented Degema Constituency. He was in the Assembly for three terms. Harry served as Deputy Speaker for eight years (two terms) and Speaker for four years.

The Rivers State Government made attempts to fly him to Paris for medical attention but before he could be airlifted, he was confirmed dead.

A statement issued by Rivers state government and made available to African Examiner reads:

“The Government and people of Rivers State received with shock in the early hours of Friday, the 4th of October, news of the sudden demise of Rt. Hon. Tonye Ezekiel Harry.

“We sincerely condole with the immediate family of RT. Hon. Tonye Ezekiel harry, the people of Degema and the Rivers State House of Assembly.

“We pray that God Almighty would give you the family the fortitude to bear this irreparable loss.”