Fulanis Abandon Community After Death Of 66 In Kaduna 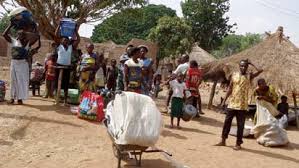 (AFRICAN EXAMINER) – The Fulani community in parts of Kajuru Local Government Area, Kaduna State, have abandoned the area after an attack on Feb. 11, which left 66 of them, mostly women and children dead.

The News Agency of Nigeria (NAN) reports that what remained of the Rugar Fulani community were burnt houses, animals, motorcycles, kitchen utensils, as well as were bodies of women and children buried in a ditch.

Gov. Nasiru El-Rufa’i, accompanied by General Officer Commanding 1 Division Nigerian Army, the Police Commissioner and journalists who visited the villages on Saturday, found the entire area deserted with no humans in sight.

Speaking on the attack, the GOC, Major- Gen Faruk Yahaya said troops deployed to the area after the attack, assisted by some villagers, discovered 37 bodies of women and children buried in a ditch and the settlements burnt.

“We were informed that the women were lured by the miscreants to the stream, and on getting there, they were slaughtered.

“The figure of deaths recorded by us is 66, but in collaboration with sister agencies, we will ensure peace is restored and people return to their settlements”.

On his part, the Commissioner of Police, Ahmad AbdurRahman explained that though the police had mopped up the area, the residents still fled their settlements in fear of more attack.

He confirmed the arrest of seven suspects in connection with the attack, adding that they would be charged to court on Monday.

The police chief said investigation was continuing, adding that it was largely to  identify the miscreants and isolate them from the good people within the communities so as to restore lasting peace.

Also speaking, the governor lamented over the politicisation of the situation by being in denial of the real issues at stake.

He advised the people to be vigilant, as those politicizing the issue have disregarded those that died simply because they were not from their tribes.

“All lives are sacred and equal, hence we must collectively bring an end to this menace,” he said.(NAN)