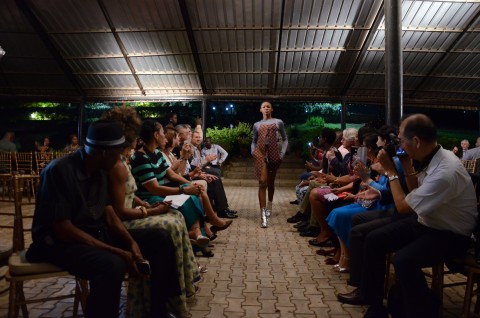 In line with its cultural relations mantra, the Embassy of the Republic of Germany in Nigeria has consistently continued to explore and leverage opportunities aimed at promoting cultural ties between Germany and Nigeria.

The German High Commission in Abuja upped the ante penultimate Thursday by partnering with Fashion Designers from Germany and Nigeria to showcase some of the latest designs in the fashion industry in both countries.

The event tagged, “German-Nigerian Fashion Show” was well attended by guests drawn largely from members of the diplomatic community in Nigeria, key players in the Nigerian fashion industry, fashionistas, beauty queens and models, the media and other stakeholders in the entertainment sector of the Nigerian economy.

Germany and Nigeria signed a bilateral cultural agreement in 1999, placing cultural relations between the two countries on a sound footing under international law.

In addition, there are a number of cultural cooperation projects being implemented by the German Embassy that are aimed at enhancing further cooperation with Nigeria. Similarly, there are also many Nigerians artists plying their trade in Germany.

For instance, there is an Intensive Visitor Programme which enables a number of Nigerian journalists to gain first-hand experience of Germany.

Such internships give journalists the opportunity to improve and hone their professional skills and qualifications and the two sides are also working to further develop relations between the German and Nigerian media.

Similarly, in the electronic media sub-sector, the German broadcaster Deutsche Welle has a highly successful cooperation programme with various Nigerian radio and television stations, providing them with training and equipment. Deutsche Welle’s English-language and Hausa services are both very popular in Nigeria.

In his welcome address at the Fashion Show, the Ambassador of Germany Nigeria and chief host of the event, Mr. Michael Zenner, said the event which featured seven successful Fashion Designers from Germany and Nigeria as well as a beautiful singer from London, clearly testifies to the cultural bond between both countries.

Mr. Zenner noted that all the Designers at the event (one from Berlin, one from Lagos and five from Abuja), are outstanding young artists who share a lot in common because they are, according to him, talented, creative and are already paragons.

“But there is one thing they really have in common, even if they are German or British or Nigerian, if they come from Berlin, Abuja, London or Lagos: They all have minimum one parent who comes from Nigeria. That explains it all”, he said.

He further explained that the designs on display by the models at the Abuja show, were specially made for a high Pan-African fashion show which should have taken place in Paris, the symbol of fashion and haute couture at the end of November this year.

“This show was cancelled and we all know the reason. Paris was badly shaken by an atrocious crime. Horrible attacks by terrorists directed against all people in the world who believe in freedom, equality and fraternity and justice in a peaceful life.

“Let us tonight feel sympathy and empathize with the families and friends who lost their beloved ones during the last weeks and days in Paris but as well in Tunisia, in Mali, in Russia, in Nigeria. Let us now show in particular solidarity with Paris by a minute of silence”, he urged the audience.

The German envoy also expressed appreciation and gratitude to all the guests on behalf of the Embassy and its partners for honouring their invitation to the fashion show.

Designers who featured at the event include, Bobby Kolade from Berlin, Chip Odina from Lagos while the remaining five, Debby African Stitches, Grazee Stitches, Homto, Keto Couture, O’godor are based in Abuja.

A cross-section of the guests who spoke with our Correspondent at the venue of the show, described it as a momentous evening of glitz and glamour.

In a related development, Germany is equally doing a lot in terms of bilateral relations in the on-going dialogue with the Muslim culture of northern Nigeria and in educational exchange and training programmes.

It may be recalled that since 1962, the Goethe Institute of Nigeria in Lagos has been actively involved in facilitating cultural activities of all kinds, particularly in the area of increasing the interest Nigerians in learning German.

In Abuja, a private German company runs a German School offering instruction according to German curricula and awarding German secondary school-leaving certificates (Hauptschule and Realschule) recognised by the Standing Conference of Ministers of Education and Cultural Affairs of the German Länder.

At the higher education level, the cooperation between German and Nigerian universities and colleges has continued to grow in all ramifications.

German universities are very highly regarded in Nigeria. Many Nigerians now in leading positions in industry, the civil service and academic life studied in Germany during the economic boom days of the 1970s.

The German Academic Exchange Service (DAAD) has academic teachers working at the Universities of Ibadan (UI) and the Obafemi Awolowo University (OAU), Ile-Ife. There are German Studies departments at the universities in UNN, OAU and UI.

In a similar vein, German instruction is offered at several universities in the south of the country, including those in Benin City, Port Harcourt, Abakaliki and Awka, and in the north of the country at ABU, Zaria and at the University of Jos (UNIJOS).

Academic cooperation also takes place in several alumni follow-up programmes run by the DAAD and the Alexander von Humboldt Foundation, which provide active support for their former students through scholarships or donations of material and equipment.