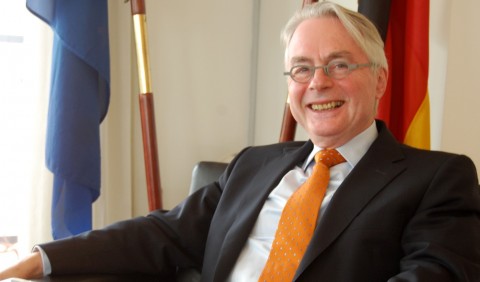 BALTIMORE, MD (AFRICAN EXAMINER) – Ambassador of the Federal Republic of Germany to Nigeria, Michael Zenner has reiterated the need for the promotion of human rights in efforts aimed at advancing global peace, freedom and democracy.

Zenner said the promotion of human rights must be the supreme goal of policy makers worldwide, adding that the adoption of such a measure will go a long way in ensuring a more harmonious and peaceful world where respect for human dignity and social justice prevails.

The German envoy added that Europe and the rest of the world must say never again to war, displacement and repression in
any form or disguise, adding humanity is facing immense challenges which must be tackled head-on in order to surmount them and   achieve the desired goal collectively.

Speaking at the ceremony to mark the 25th anniversary of the German Unity in Abuja, he noted that the anniversary is a
very historic milestone which represents the day Germany was re-united in peace and freedom after decades of being  divided into East and West, 25 years ago.

According to him, what began with the peaceful revolution in East Germany and the fall of the Wall on 9th of November 1989 found its crowing moment on the 3rd of October 1990.

“Millions of Germans and many foreign guests celebrated this joyful event in Berlin and throughout our country. But not only did the Berlin Wall fall, also the Iron Curtain, which had divided Europe, was swept away. So Europe came together again in peace and in freedom.

“This 25th anniversary, especially for us German and us Europeans, also means a commitment in Europe and worldwide
for peace, to advocate freedom and democracy and to preserve what has been achieved. Not only in Europe, but worldwide there must no longer be war, displacement and repression”, he said.

He also used the occasion which was attended by a retinue of members of the diplomatic corps, officials of the Nigerian government, development partners, the media and other invited guests from far and near, to express the appreciation of the German government to its eastern neighbours which include, Poland, Hungary and the former Czechoslovakia for their role in the unification.

Zenner said without the freedom movements in the societies of these countries, such as the Solidarnosc in Poland or the
Charter 77, the radical change in Europe would not have been possible in the first place.

“We thank extraordinarily and in particular our French, British and American friends and partners who have supported
us for decades. We are also grateful to the former head of State of the Soviet Union, Mikhail Gorbachev”, he added.

He also congratulated all Nigerians for their commitment to the democratic elections that were generally free, fair and
non-violent and led to a democratic change of Government in April this year, noting that Nigeria is a key country and an important partner in West Africa, Africa and globally.

The envoy further maintained that Germany and Nigeria have been closely connected and been in partnership for decades, adding that the intense relations and friendly cooperation between both countries can be felt in all areas of politics, culture as well as in economy and trade.

“Our State structures, (we are both federal States), our multi-faceted societies and our cultural diversity are hallmarks of our two countries. The German Chancellor Angela Merkel invited President Mohammadu Buhari to the G7 Summit outreach on 9 June 2015 in Elmau in the Bavarian Alps, so that an enhanced multilateral cooperation could be discussed at the highest political level.

“Beyond that Chancellor Angela Merkel and President Mohammadu Buhari have agreed to further deepen our close cooperation during bilateral talks in Elmau and during a short meeting within the framework of the UN General Meeting. This applies to both: bilateral and global issues”, he stressed.

Zenner equally harped on the role of about a 100 German companies doing business in Nigeria in terms of maintaining
close economic relations between both countries, adding that the joint efforts aimed at promoting economic development in Nigeria, characterize the close German-Nigerian relations.

He also noted that the Goethe Institute, the German Embassy in Abuja and the Consulate General in Lagos promote an intensive cultural exchange and German-Nigerian social dialogue.

“Writers, visual artists, musicians and scientists show the diversity of the culture and society of the other in our respective countries. Annually, 400 young Nigerians study in Germany. Many professors and vice chancellors in Nigeria are former Alexander von Humboldt Fellows, the most prestigious German research institution”, he further explained.

In the health sector, he said German doctors and nurses have supported Nigeria to successfully defeat the outbreak of
Ebola disease in the last year, adding that together Germany will together with other partners, do everything possible to
make sure that the polio disease no longer poses a threat to children in Nigeria.

“There is not enough room to present all facets of our excellent relationship. But I am delighted to be able to celebrate the Day of German Unity in Nigeria, a close and important friend of Germany. I thank you all very much for the amicable and warm reception of my family and I“, the envoy added.