Hardship: Calm Nigerians Down for me, Buhari Tells Clerics 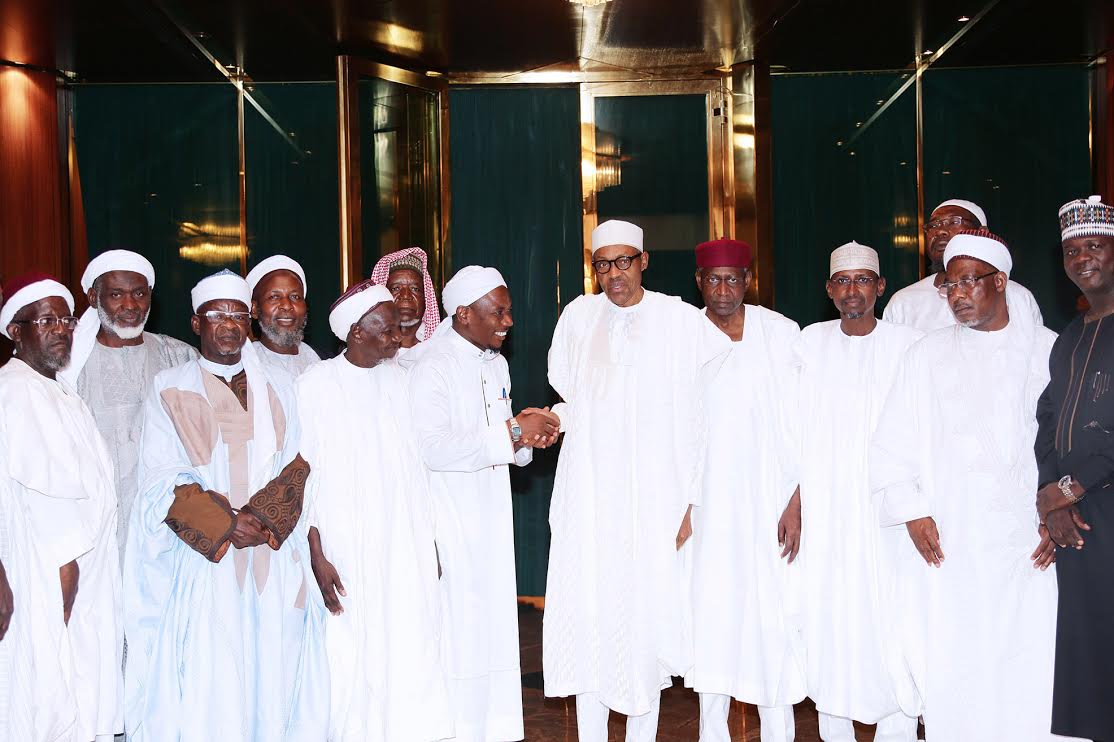 The president made the appeal on Thursday at a meeting he held with the Council of Abuja Imams at the Presidential Villa, Abuja.

Buhari said he was aware of challenges of life facing the average citizen, hence the need for the religious leaders to carry the message of hope to the people that things will improve.

“Keep calming the people. The leadership at various levels is trying to solve problems of poverty, unemployment and insecurity bedeviling the country,” Buhari requested religious leaders throughout the country

The president told the clerics that the Federal Government chose to give priority to agriculture in order to create jobs for unemployed citizens and give the country food security.

He said although efforts had begun, there was a bigger plan for the provision of fertilizers, insecticides and land preparations starting from 2017.

Buhari also urged state governments and community leaders across the country to organise the population into cooperative societies to key into the agriculture reforms programme, stressing that “extension services, not money will be provided.”

Buhari also informed the religious leaders about the efforts being made to improve power supply in the country.

He listed ongoing efforts to attract foreign investment from China and some friendly countries that indicated willingness in developing the proposed Mambila and other hydro-electric power projects in the country.

On the renewed violence in Niger Delta, the President assured his guests that the steps the government was taking on the crisis situation in the region would lead to long term peace and stabilise the region.

On the war against corruption and the Boko Haram terrorism, the President said his government would remain resolute and relentless.

“We have no plan to humiliate or embarrass anyone through these actions. We are merely interested in instituting justice and fairness for all.

“Whoever was caught as having stolen from the public will be forced to return the loot to the treasury. The nation needs the money,” he added.

Earlier, the Chairman of Abuja Council of Imams, Dr. Tajudeen Adigun, was said to have, on behalf of the delegation, commended the efforts of the Buhari administration in the war against corruption and terrorism.

He also drew the President’s attention to problems in the economy, health services, education and unemployment.