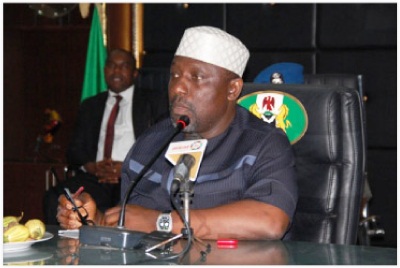 IMO, NIGERIA (AFRICAN EXAMINER) – Less than 24 hours the Imo State Governor, Rochas Okorocha, announced his plan to reduce the normal working days from 5 to 3 a week, as well as slash workers monthly salaries, the State chapter of the Nigeria Labour Congress (NLC), has vowed to resist the move, contending he lacks the constitutional power to do that.

Imo State NLC Chairman Comrade Austin Chilakpu, said this at the weekend while reacting to the plan.

The Labour Leader maintained that Governor Okorocha “does not have the power to determine working days in the state, contrary to what the Nigeria constitution has already prescribed.

AFRICAN EXAMINER, recalled that Okorocha, had last Friday while speaking with newsmen on the state of affairs in Imo, hinted that the State’s executive council was considering slashing the working days from the normal five days to three to avail civil servants the opportunity of engaging in other businesses to earn extra in­come to augment their salaries.

But in contrary, the unionist insisted that the slashing of the constitutionally prescribed working days was beyond the powers of any state government including that of Imo State.

The Imo NLC boss, noted that the International Labour Organisation, ILO, has prescribed 40 working
hours from Monday to Friday which he said, is what the Nigeria constitution has adopted, and as such, could not be altered on the whims of Governor Okorocha.

Chilakpu, stressed that the public holidays recognised by the Federal Government (FG) were listed in the calendar, pointing out that what the Imo State government was trying to do was to subvert the laws of Nigeria.

“Claims by Governor Okorocha that Imo State pays the highest salaries in the entire Southeast is not correct because the workers in the state receive the same minimum wage paid by other states and it is not a gift but as a result of negotiation.

According to him,”There are states that pay more than Imo State. I don’t know why the Governor always tries to borrow negative examples,”

Meanwhile, the move has continued to generate mixed reactions in the state; while some are in support, many, especially civil servants have condemned it.