There was a rowdy session at the plenary sitting of the Plateau State House of Assembly on Wednesday as lawmakers opened discussions on the allegation of gross financial misconduct leveled against Governor Jonah Jang. 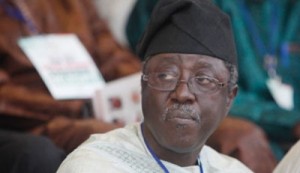 The Speaker of the State House of assembly Rt. Hon. Titus Alam as he tried to frustrate the mentioning of the petition against the governor during the plenary, which turned the session rowdy.

A group under the aegis of Plateau Patriotic Front (PPF) had petitioned the House stating allegations of gross financial misconduct.

A copy of the petition made available to African Examiner in Jos, on Wednesday, “Allegation of Gross Misconduct against Gov. Jonah David Jang of Plateau state.

It contains allegations of extra budgetary spending, misappropriation, inflation of contract sum, unauthorized bank loan as well as the involvement of the Governors family in financial management of the state, among others.

The group had copied all members of the House, which made the petition the number one item on the order paper tabled before the lawmakers at the sitting.

Alams had informed the House of the petition, and asked for comments from members.

Hon. Abbas Wokdung representing Dengi constituency, who rose first to speak on the matter said, “Having carefully read through the petition, the contents are too weighty to be ignored. In the entire petition, the house is more hit because the petitioner called us names and also alleged that we have been bribed by the governor not to check the government.

“The House must get to the bottom of this petition in the interest of the entire people of the state. We also need to probe the allegation to clear our names, the petitioners said we are clueless, docile, bottle lockers and praise singer of government, so we need to clear our names as a house.

However, Wokdung was obstructed by another member from Jos South constituency, which is the Governor’s constituency, Hon. Dalyop Mancha with a point of order.

The Speaker recognized the point of order and members went rancorous for obstructing Wokdung.

Alams had to over rule the members by forcefully adjourning the sitting for another date.

The Speaker in his ruling said, “It is obvious from the point of order raised that some members have not been served copies of the petition and it will not be fair to talk over it, we have to adjourn the House to discuss the petition on another date.

However, some members insisted that the petition be mentioned even if the discussion may not take place.

Member representing Pankshin South in the House,  Hon Istifanus Mwansat said, “This attempt is not to discuss the petition against the governor, but at least let the house read the petition formally before the house and then we can shift the discussion.

But the Speaker insisted the petition cannot be mentioned until all members are served copies. He thereafter adjourned sitting.

Aggrieved members of the House spoke to journalists  after the sitting expressed their disappointment on way and manner the house was forcefully adjourned.

Hon. Abduallhi Ladan Garkuwa from Mangu North constituency said, “This petition is already a public document, why is the speaker frustrating our attempt to discuss it, the claims that some members are not served copies is only an attempt to frustrate members from discussing the issue.

“The contents of this petition is about 85% factual, there is no way to pretend as if we don’t know most of these allegations, the petitioners have stated the obvious facts, the Governor is only buying time to kill the petition. He stressed.

“My annoyance is that the Speaker had forced the House to adjourn without mentioning the petition but these kind of scandal is not the type we can sweep under the carpet, we must discuss it or we are not worth our value as legislators”.