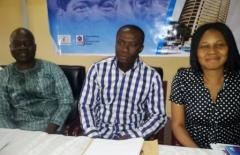 President, Women Arise for Change Initiative, Dr. Joe Okei-Odumakin, has called on Nigerians to have a change of mindset that says one particular ethnic group cannot serve over others.

Okei-Odumakin disclosed this while speaking at a two day Summit on Fostering Peaceful Inter-ethnic Relations in Nigeria with Lagos and Ibadan as Melting Points organized by Journalists for Democratic Rights (JODER), in Lagos on Tuesday.

She said that there is need for the men folks to know that it is women and children that suffer most whenever there is ethnic crisis in any community.

The human rights activist who presented a paper titled, Ethnic Violence: Implications on Women and Children mentioned that ethnic violence have continued to wreak havoc on the lives of women and children, adding that such has become the norm since the health and educational services that are key to family and community survival and development is weakened and destroyed whenever the society is confronted with these cases of violence in which remote causes often time are frivolous and petty.

“Women and children are the one that suffer the bulk of the lost in ethnic violence, within Nigerian context, there is a lot of mistrust, disharmony which often result into violence and it is in most cases perpetuated by men folks. There is need for them to note that there is need for a change of mind set, the mindset that say one ethnic group cannot serve over other ethnic groups. If there is trust, respect, harmony and there is justice everywhere, I believe all our women and children will smile and if the men folk can have it at the back of their mind that when they perpetuate this act, it is the women and children that will suffer it, then, there will be high level of tolerance and respect for other ethnic groups.

“More importantly, no one should allow ethnicity or religion to bring one into strong strive with another ethnic group because there is nothing that cannot be resolve through dialogue. It is always better to have dialogue so that there will be peaceful resolution. Nobody have monopoly of force and if we believe that we must respect one another, all the ethnic groups will live together in peace and harmony.”

Dr. Joe Okei-Odumakin, however, caution politicians on statements that could arose anger from any ethnic groups.

In her recommendations, the President of Women Arise for Change Initiative said the needs of children and women must be at the heart of all actions so as to resolve conflicts and implement peace agreements.

According to her, “Children in ethnic violence situations must be treated as a priority concern in all monitoring and reporting activities by the emergency personnel and those of other responsible organizations. Health, psychosocial well-being and education should be the pillars of all humanitarian assistance for children in emergencies. Educational, training and health-care needs of adolescents should be given priority attention to assist their well-being and to discourage their participation in conflict situations, trafficking in prostitution, and drug abuse.

“All incidents of war- time rape and other sexual torture must be prosecuted as war crimes. A National campaign should be launched to stop the recruitment of children under the age of 18 into the armed forces. A complete ban on the use, production, trade, and stockpiling of Arms should be supported by Civil society Organizations. The international community should closely monitor arms transfers and impose a total ban on arms shipments to conflict zones.”

Meanwhile, Secretary, Arewa Youth Consultative Forum (AYCF), Abubakar Kudu, who was speaking on ‘preventing ethnic crisis in the South-West: The people’s alternative’ said Nigeria government at all levels are the one fuelling various ethnic crisis that is gradually tearing apart the peace of the country.

“I must be frank; government is the only problem we have in Nigeria because they are one that will send some groups of people to go and kill, then, the group will turn it to something else. Let us look at the case of slain leader of Boko Haram, Yusuf, instead of killing the young man, the government agency could charged him to court.”

Kudu argued that the Boko Haram insurgency that is rampant in the country has the hand of some people President Jonathan’s administration. “Irrespective of ethnic groups, we must all come to the realization that the politicians are our problem in this country; nobody hear them when they are sharing what belongs us then, they will now come out to tell us inciting words that makes an Hausa man to see an Igbo or Yoruba man as his major enemy that must be eliminated,” he added.