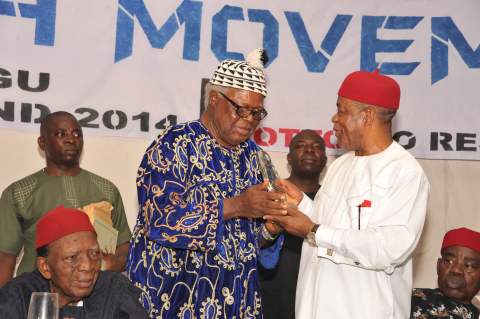 Three Igbo groups, the Igbo Youth Movement, the Igbo Women Assembly and the South East Self Determination Coalition have honoured Abia State Governor and Chairman South-East Governors’ Forum, Chief Theodore Orji, for developing his state, Abia and galvanizing the South-East zone to the path of progress. 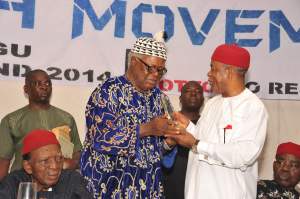 Gov. Orji of Abia Honoured in Enugu by Igbo groups

The Igbo Youth Movement conferred on the Governor the Quintessential Igbo Leader award, the Igbo Women Assembly, the Light of Ndigbo and the South East Coalition honoured the Governor with the Onyendu Ndigbo award.

Speaking after receiving the awards during the 15th anniversary of the Igbo Youth Movement at the Nike Lake Resort Hotel Enugu, Governor thanked the various groups for honouring him and disclosed that he is interested in bettering the lots of the people of his state and Ndigbo.

He said the various groups decided to honour him because of his numerous accomplishments in office, pointing out that apart from developing the health and other sectors of the state, he has empowered thousands of Abia youths to be self-reliant.

According to him, Abia has done well based on the resources at its disposal and disclosed that his government has not borrowed any money from the bond market.

Governor Orji said that he is using the Governor’s forum to champion the course of Ndigbo and called on Ndigbo to speak with one voice.

He stated that the Igbos are known for hardwork and their intelligence and restated his desire to restore the past glory of Ndigbo.

Earlier, the chairman of the occasion, Prof. Ben Nwabueze said Ndigbo needs someone like Governor Orji to lead them and stated that the Igbo’s remain the heart of the country.

In their speeches, the leader, South East Self Determination Coalition, Comrade Samuel Eneh, the leader, Igbo Women Assembly, Prof. Chinwelike Ejike, Mrs. Maria Ugo and Col. Joe Achuzia appreciated all that he is doing in Abia State and the South-East zone and urged him to continue.