Deputy Speaker of the Federal House of representatives, and 2015 Governorship Aspirant in Imo state, chief Emeka Ihedioha over the weekend received the disgrace of his life, as angry youths of Ngor Okpala stopped him from speaking at a Peoples Democratic Party, PDP, rally held in the area. 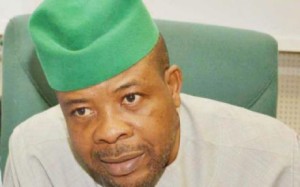 African Examiner reports that the rally is being organized state wide by the leadership of the party in the state with a view to mobilising more people for them ahead of the 2015 election, which they are desperate to win.

Ihedioha, had stormed the rally held at the Ngor Okpala local government headquarters, Umuneke, with scores of his supporters who could not believe the embarrassment and humiliation meted on the ambitious politician.

To show the deputy speaker what they had in stock for him, the youths who had been chanting victory songs for the PDP, suddenly changed their songs and tone to that of war situation.

After all the party chieftains and governorship aspirants, which include (Okenze Sylvester Obinna, Col. Lambert Iheanacho, Senator Chris Anyanwu and Prof. Jude Ejiogu) had finished their speeches, it was the turn of the deputy speaker to make his remarks.

Trouble however began for Ihedioha, when after mounting the podium and observing protocols, he told the people of the area the need to vote for him to become the governor of the state in 2015.

The youths immediately started chanting “we no go gree o, we no gree” and “no 2015 for Ihedioha” while others sang “mmanu akara di uto, onye ratu ibe ya arara (meaning-akara stew is sweet, it’s not meant for only one person)”.

The chaotic atmosphere however, forced Ihedioha to drop his microphone and was guided to his waiting jeep by his security aides. He immediately headed straight to the house of Okenze Obinna, where he was seen ruing his ordeal and accusing some aspirants from the area of sponsoring the attack on him.

Addressing newsmen at the field, a leader of the party in the area said “you know when a ceremony is going on and somebody comes in and drives through the arena, you are likely to spark off resentment from the crowd that is what has happened”.

“Already, Ngor Okpala people are weary of domination by a particular group, they are not happy about it.

“People should know that Ngor Okpala people are not happy that the House of Reps Seat has been taken from them for third consecutive times and there is still an attempt to rob them of that position again for the fourth time.

“So, why won’t this bring about some resentment? It was this kind of thing that made the people to begin to shout ‘we no go gree, we no gree’ when the deputy speaker began to make his speech”, the PDP leader stated.

Meanwhile, some of the angry youths who also spoke to newsmen, vowed to resist Ihedioha’s ambition, saying “is he the only person in Owerri zone, after being in the House of Reps for almost twelve years, he wants to be governor, that is unacceptable to us” Obinna Diala stated.