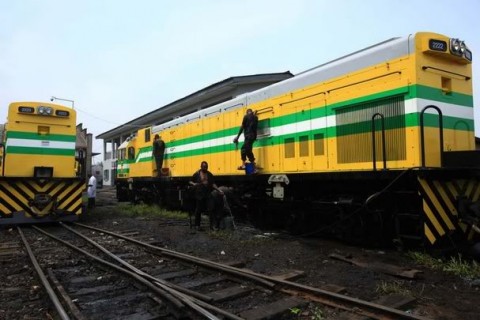 BALTIMORE, MD (AFRICAN EXAMINER) – The repeal and re-enactment of the Nigerian Railway Corporation Act CAP N129, LFN 2004, 2015 (SB. 001) is targeted at re-vitalizing and enhancing the operational framework and removal of the impediments that hindered the international best practices within the rail transport sector. This Bill is currently at the committee level for public hearing, chaired by Senator Gbenga Ashafa.

Nigeria, particularly between the mid-1950s and 1970s operated a network of an efficient rail system of transportation, which not only served as a safer, cheaper and more effective means of transporting passengers, goods and services across the length and breadth of the country but also a major source of employment.

It is a sad one for the sector that until the inception of civilian administrations in 1999, wherein the rail sector received some serious attention, little or next to no investments was made in the Nigerian rail sector from the mid-1980s when the Nigerian Railway Corporation was declared bankrupt – till very recently when it has been resuscitated.

Rail transport is the strong base of social and industrial activities in both developed and developing counties. However, it appears that the dream of having efficient rail transport systems is elusive to Nigeria and Nigerians.

The country has lots of benefits to derive from the revival of the railway transport system. If the obsolete Railway Corporation Act is carefully repealed and overhauled, there is no doubt that the populace will enjoy cheaper means of transporting goods and raw materials; also the incessant damages to our road and lives by heavy duty trucks will be reduced.

It is therefore the purpose of cross-ventilating ideas on developing a rich, practical and well-crafted legal framework for the Nigerian Railway Corporation, and the entire rail value chain by extension, that the Committee on land Transport has called a Public Hearing which was declared open by the Senate President, Dr. Abubakar Bukola Saraki to enrich the quality and content of the Bill.

This Bill is one of very important  30 Bills on the Legislative agenda of the 8th Senate, and is also very crucial to the transport sector of our economy. This Bill will not only usher in a new era of growth, but will also ensure efficiency and sustainability. This Bill will also go further to change the outlook of our rail system and the economy.

Let us put the viability of a smooth running rail line in every day perspective.

A working railway system means that, Adamu, the onion farmer in Zungeru can put his onions on a railway coach, and the next day he is in a big market in a town like Ilorin, where he will sell his onions and go back home by the next scheduled train service.

No time wasted in needless traffic or at different road blocks. No chance of robbery on the way, and the reduced cost on freight will put more money in his pocket and that of his family — resulting in more money in the system.

With a functional rail system, haulage via the roads will be greatly reduced, thereby prolonging the life span of our roads, keeping more money in government coffers for intervention in other areas of the economy. Imagine all the tippers and lorry’s hauling petrol, gravel and other heavy materials using rail instead of plying Lagos-Ibadan express way.

With a working rail system, there will be less pressure on the big cities as Nigerians can afford to travel cheaply from their small towns and villages to do business in the cities, returning back with ease to their abodes, without having to stay put in shanty towns at the outskirt of the cities.

It is a win-win situation

Laying and building railroads are labour intensive operations, if handled with sincerity of purpose, it means that thousands of people will be employed in the value chain. This is even more so in this era of unbelievable and unconscionable level of unemployment and lack of social mobility in our country provided the right laws are put in place, that the companies building the rail sector do transfer knowledge to Nigerian engineers, and that the work is carried out by Nigerians and importation of people from other countries who will rather use citizens of their own country at the detriment of Nigerians.

Additionally, as Nigeria pushes to establish more competition to promote growth in all its sectors, it is important to let companies from all over the world to partake in the bidding process to run trains in Nigeria.

A good example, would be to have companies like General Electric, Amtrak, TFL rail who maintain a great level of professionalism and transparency the opportunity to partake in a genuine Public Private Partnership in Nigeria’s rail sector. However, as we embark on this shift, we must ensure that the processes that govern the sector are sanctioned with a high degree of transparency and best practices. This means that the government’s oversight function should be businesslike, proactive and investors’ friendly.

In our renewed interest in such a vital sector, transparency must be our watchword.

The uplifting news is that, the National Assembly under the leadership of Dr. Bukola Saraki has assured that it will pass the right reforms to enable serious private public partnership to encourage companies who will put safety, quality first above profit and the reforms will be deliberated with some degree of urgency it merits.

Moving forward, we can only hope that this Act when re-enacted will be able to stand the test of time and open up the rail sector value chains to private investments in the area of concessioning, determination of public service obligations, effective passenger services, and the establishment of an efficient regulatory framework for private participation.

It Is my hope and that of many Nigerians, that this very important bill, will have bi-partisan support In both chambers for speedy passage and the executive will join hands with the legislative to make sure foreign companies that will be allowed to partake in this process do follow international best practices at all levels.

Bamikole Omishore is the Special Assistant on “New Media & Advocacy to the President of the Senate. Dr Abubakar Bukola Saraki