International Institutions of Justice in the Eyes of African Leaders

The world has been shrinking and coming together through the social media and internet much faster than many African leaders would desire. An index of good governance in Africa has been the Mo Ibrahim Annual Award for good leadership in Africa but which has no winner since 2009. The benchmark was too high for any African leaders for four consecutive years.  The Mo Ibrahim index measures governance outcomes by looking at both country and regional performances using four major parameters, namely, (a) Safety and Rule of Law, (b) Participation and Human Rights, (c) Sustainable Economic Opportunity and (d) Human Development. The organisation uses 88 core indicators to arrive at a winner. These indicators are to allow for objective assessments and comparisons among African leaders. The core data points are available to assist African leaders and citizens to create a fair and free competition annually. 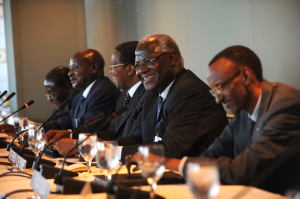 On the other hand there is the International Criminal Court, ICC, a permanent tribunal to prosecute individuals for various offences, including genocide, crimes against humanity, war crimes and crime of aggression. The ICC was created by the Rome Statute and it came into force on 1 July 2002. The Court has established itself in The Hague, Netherlands, but its proceedings may take place anywhere. It is intended to complement existing national judicial systems, and may only exercise its jurisdiction when national courts are unwilling or unable to investigate or prosecute such crimes. In most cases national courts are tools in the hands of African leaders to prosecute their opponents, political activists and all perceived dissenting voices.

Currently, 122 Countries are States Parties to the Rome Statute of the Court. These include all of South America, nearly all of Europe, most of Oceania and roughly half the countries in Africa. Additional 31 other countries, including Russia, have signed but are yet to ratify the Rome Statute. The law of treaties obliges these states to refrain from acts which would defeat the object and purpose of the treaty until they declare they do not intend to become a party to the treaty. Only three of these states namely, Israel, Sudan and the United States of America USA have informed the UN Secretary General that they no longer intend to become states parties and, as such, have no legal obligations arising from their former representatives’ signature of the Statute. Meanwhile 41 United Nations member States have neither signed nor ratified or acceded to the Rome Statute; some of them, including China and India, are critical of the Court.

The ICC has been accused by many, including the poor countries especially African leaders. Is ICC primarily targeting people from Africa? To date, all the ICC’s cases have been from African countries. Ehuru Kenyatta, the current president of Kenya is currently been investigated by the court. Why is the court focusing mainly on African leaders? Are African leaders the worst globally?

It is no gain saying that Africa may be lacking in good governance and quality leadership. But do we need ICC to tell Africa its weaknesses in leadership or a system to point Africa to where it ought to be? Countries that have refused to sign up to State memberships cannot be arrested by the court whereas a big country like USA who had earlier signed is running away from such an important global moral organisation.

There are different faces of disconnections in the global arena. First there may be many African leaders whose mindsets and orientations are still in the twentieth century and certainly not with the rest of this 2013. Secondly only reported cases are prosecuted by the court. That is Africans have been reporting their leaders who eventually get prosecuted by the court. Thirdly the advent of internet, social media and mobile phone system have further exposed the poor performances of African leaders and expose them to face some justice. In my private finding it was discovered that the majority of the population thinks that most African leaders are quilt of poor performances using ICC parameters and should be prosecuted. Most African leaders are not living in the 2013.

The new intervention from the Western democracy and economy into Africa ought to be in the same direction of Mo Ibrahim Award and participatory rather than allowing poor elections that produce anarchies and totalitarians as results. At the point of contesting the Western intelligential has enough dossiers to disqualify candidates of corruption and poor performing tendencies. The West should be involved, for example, by helping to expose their foreign accounts, properties abroad and ask for accountability before they can contest for further powers and carry out more embezzlement.