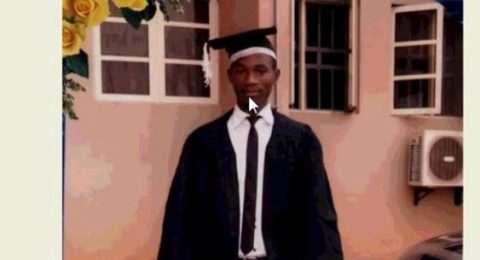 ‌(AFRICAN EXAMINER) – Following recent alleged murder of a final year law student of the Nnamdi Azikiwe university, (UNIZIK), Awka, Mr. Augustine Ugwu,  the local government chairman of Nsukka council Area of Enugu, where the incident took place, Hon. Patrick Omeje, has urged the Inspector General of police, Mohammed Adamu, to carry out a full scale investigation into the act, and bring the perpetrators to justice.

The Council boss, who spoke to our correspondent in Enugu, Friday, on the issue, expressed shock that the father of the deceased and some people, he described as his  “political enemies” in Nsukka, are  playing politics with the incident, saying they have been trying to  blackmail him on the matter which he said, he knows nothing about.

Omeje said: “those accusing me or trying to tarnish my image over the death of the young man, are same political enemies in Nsukka, that have been doing everything within their powers to rubbish my reputation. They believe that linking my name to such unholy act would halt and affect my political carrier.

According to the council chairman, who denied any knowledge of the barbaric act, stated that “for me, a clear conscience fears no accusation, the peddlers of the wicked rumor are just trying to give a dog a bad name in other to hang it. But am not bothered, the police should do their job. They alleged that I ordered the killing of the boy, which is laughable.

“This is the reason why I’m calling on the police hierarchy in Abuja, to institute a thorough investigation on the matter, with a view to unravelling the real circumstances surrounding the incident.

The Chairman, also denied allegation that the late Ugwu was killed by men of the Nsukka vigilante group who arrested him and handed him over to the police, insisting that information in his disposal as the chief security officer of the council Area, has it that he was not killed by the vigilante team.

Omeje, who claimed that he gave Augustine’s father, Andy Ugwu, the sum of N1m to help him for his burial, said the victim’s father wanted to blackmail him.

“Augustine was a thief and murderer. We have cases in Enugu and Nsukka of him murdering people. There are strong cases against Andy’s son and the father declared before the DPO of the Nsukka Police station that he was not interested in his son’s death. He even said at a time that he disowned him in 2018.

African Examiner reports that the family of Ugwu, has petitioned the Inspector-General of Police, Mohammed Adamu, over the circumstances that led to the unfortunate demise of their son.

The family, through the legal firm of Da Sphinix Legal Practitioners and solicitors, urged the IG to bring everybody involved in the death of Augustine to justice.

In the petition addressed to the  Nigeria’s police boss, the family accused the officer in-charge of the local vigilante group, the Nsukka Anti-Cult, DSP Ochin Nnamdi, of killing Augustine on the instructions of the Chairman of the Nsukka Local Government Council, Enugu State, Patrick Omeje.

The family said, Augustine had on April 23, 2020, gone to a pub on Odobido Street, Nsukka, in company with two of his friends when armed men from the Anti-Cultism Unit stormed there and arrested him.

“On April 23, 2020, Augustine went to drink with two of his friends in a shop on Odobido street, Nsukka, where one man, Emeka Ogbu, alias Mekeke, is the manager. In a swift action that happened not so long after they entered, a team of armed men in a black Toyota Sienna minivan with the inscription, Anti-Cult Nsukka Local Government, came and all the occupants came down from the vehicle with different guns: pump action and revolvers.

“One Oliver Ozioko, alias Oliver Plaza, led them and wielded a pump action in his hands and acting like a Rambo, entered the pub and demanded for Austin, as the victim was popularly called, but the shop manager demanded an explanation but they pointed a gun at him.

“Augustine agreed to follow the armed men, but at the point of entering the vehicle that brought the men, Oliver pulled the trigger and shot him in the leg, causing him to fall. He was then pulled into the vehicle with his leg shattered by the bullet fired at a close range and driven away” the petition reads.