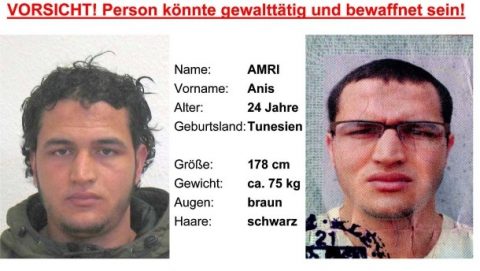 Italy’s Interior Minister Marco Minniti confirmed that the man who opened fire on police, who asked him for ID during a routine patrol in the Sesto San Giovanni area in the early hours of Friday, was “without a shadow of a doubt” the Monday attacker.

A police officer was injured in the shootout, but his health is stable. It would be recalled that the attack claimed 12 lives while 49 people were injured.

German officials confirmed that Amri’s fingerprints were found inside the truck that was used the evening’s attack. The attack took place at a Christmas market at the Kaiser Wilhelm Memorial Church in the west of the German capital.

Media reports indicated that Anis Amri had traveled by train from France to Turin, and then taken another train to Milan.

From the central station, he traveled on to Sesto San Giovanni, a working-class area. He was on foot when he was asked to show his documents, Ansa reports. Thereafter, he pulled a pistol from his backpack and began shooting.