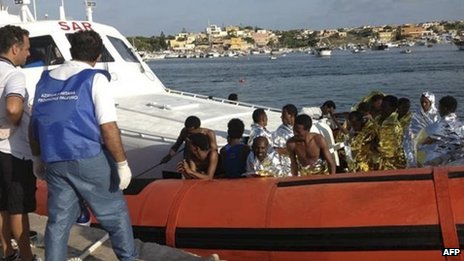 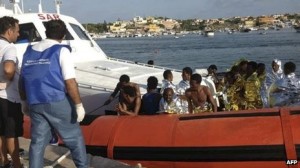 At least 130 African migrants have died and many more are missing after a boat carrying them to Europe sank off the southern Italian island of Lampedusa.

A total of 103 bodies have been recovered and more have been found inside the wreck, coast guards say.

Passengers reportedly threw themselves into the sea when a fire broke out on board. More than 150 of the migrants have been rescued.

Most of those on board were from Eritrea and Somalia, said the UN.

The boat was believed to have been carrying up to 500 people at the time and some 200 of them are unaccounted for.

Italian Interior Minister Angelino Alfano said the ship had come from Misrata in Libya and began taking on water when its motor stopped working.

It is thought that some of those on board set fire to a piece of material to try to attract the attention of passing ships, only to have the fire spread to the rest of the boat.

Simona Moscarelli, a spokeswoman from the International Organization for Migration in Rome, told the BBC that in order to escape the fire, “the migrants moved, all of them, to one side of the boat which capsized”.

She estimated that only six of about 100 women on board survived, adding that most of the migrants were unable to swim.

“Only the strongest survived,” she said.