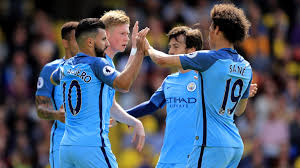 AFRICAN EXAMINER)- It is a measure of Manchester City’s divine attacking rhythm of the last few months that a goalless draw away from home against Roy Hodgson’s improving Crystal Palace will be hailed as a minor triumph for the Premier League title race, such as it is.

It was a fine afternoon for Palace, who produced a performance of energy and ambition to more than play their part in a thrilling goalless draw.

They even managed to miss a penalty near the end, Ederson saving Luka Milivojevic’s poor kick with two minutes left on the clock.

This would perhaps have been an injustice given the ease with which Wilfred Zaha tumbled like broken reed under Raheem Sterling’s challenge.

More concerning for City fans was the sight of Kevin De Bruyne being carried off on a stretcher after Jason Puncheon’s crunching tackle towards the end of a bruising game for both teams.

Gabriel Jesus faces up to 2 months out following the injury while De Bruyne status is yet to be announced.

The injuries of the two key players appear to be more costly than the 2 points dropped by city in their historic 18 winning run, the highest in one reason in the premier league.