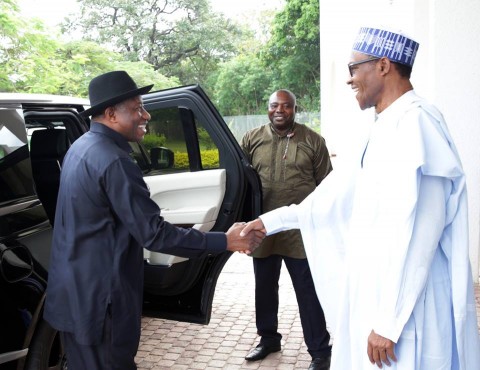 “You really knocked on the door so hard.”

“I was not sure if anyone was home.”

“We are always at home, no room for waka about or overseas trip; the treasury is already empty.”

“There is no time for such junket anymore; we want to build and fix a myriad of problems.”

“Your Excellency, you have to take care of yourself first now; you eat first before you can think of the people.  The people will always be with us now!”

“Whatever.  Your Excellency, what can I do for you again?”

“I just came to see you about a small matter.”

“Ok.  What matter is that?  Oh, I am sorry… What would you drink?  Hennessey your favourite?”

“Maybe later.  About the matter….you see the money the British police found on that woman the other day?”

“I was shocked and disappointed.”

“Huh!  I can see that you are very disappointed.”

“Because I was not privy to anything like that happening in that department.”

“You did not know anything?”

“I swear, I did not know.  That woman was uncontrollable and it was Mama Peace that forced me to give her that position.”

“My president, you don’t know Mama Peace?  That is my wife, my wife Patience.”

“Oh, Patience is Mama Peace, and she was the one who imposed the lady on you?”

“Well…you see…I have to please her you know.  But the woman was so obnoxious; she won’t listen and there were rumours all over the place about her.  She was trouble.”

“But still you kept her; you did not move her to another department, you did not remove her, and she was untouchable.”

“I did not touch her, sir.  I hear those salacious stories but I never touched her.  Mama Peace will kill me if I try to.  The fact is that she was not even my type.”

“I hear you.  My worry is that she is not cooperating enough with the British and our people on the ground out there.”

“That was why I came here now.”

“You have some information that might be useful to us, and help us crack the case?”

“I know she’s stubborn and I warned her about the planes she rented that time.  I did not approve it and I did not encourage it, but she was using them anyway and no one could stop her.  But I know nothing about the money, her money or any other money the British may have found on her or traced to her.”

“You knew the British traced some money to her?”

“Well I heard about it.  It is the talk of the town and it is on social media; people talking about it and many slandering me and mentioning my name when I knew nothing about the matter.  The truth is that I have nothing, absolutely nothing.”

“I hope you have at least something to live on, not like you are now a charity case?”

“I remember Alams said that you are just managing yourself like most Nigerian families.  As for Alams, may Allah grant him aljannar fridahus.”

“Amen.  The poor man did not have anything when he died.  He was as poor as a church rat.”

“It was a shame he did not have the opportunity to defend himself in a British court.”

“I knew he was looking forward to it but God has another plan.”

“Oh jes, Alams was a very decent man, and very pure at heart.  Why did you think I pardoned him?”

“Because he was your mentor.”

“Not at all.  It was because he was a fair-minded and transparent man.”

“But then why did he jump bail in London?”

“You know our people and their dirty politics, it was politically-motivated and Alams was to spend the rest of his life to prove it and defend himself.”

“About the woman in London, are you in touch with her?”

“But where were you when she was awarding oil blocks to fronts and friends and family right, left and centre?  Where were you?”

“You were supposed to be supervising her but it appeared she was left alone – to her own devices.  By the way, how many oil blocks do you have?”

“Is it that you have none in your name but 2-3 held in trust for you by some of the same people that are fronting for her?”

“The British have provided us details, names, companies, etc.”

“Did the British mention me by name?”

“It is not wayo.  This is your chance to open up because she’s spilling the beans big time.”

“She’s spilling the beans?  Good for her but let’s see where that will lead her.”

“She knows she’s going to jail alright but I do not think she wants to go down alone while others are enjoying the loot.”

“What do you want me to do?  I knew from the start that the woman was evil.  She’s worse than those PDP women, so called women leaders who parade Abuja for contracts.”

“You mean you don’t know them?”

”Hmm!  I think we need to talk another time.”

“You mean you want to come back again to visit Aso Rock?”

“Good.  Know that you are always welcome here and you are free to visit anytime.”