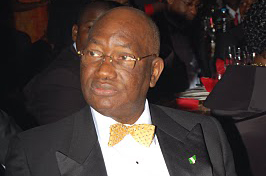 Nigeria’s President, Goodluck Jonathan has condoled with the family of former Chief of General Staff, Vice Admiral Mike Akhigbe (retd), who died in the United States on Monday.

Jonathan also condoled with the people of Edo State for losing their illustrious son, who had served the nation with distinction and merit.

The president, in a condolence message issued and signed by his Special Adviser on Media and Publicity, Dr. Reuben Abati further commiserate with the Nigerian Navy, which Akhigbe once led as Chief of Naval Staff.

He described Akhigbe as a very courageous officer who patriotically served his nation to the best of his God-given abilities throughout a most distinguished career in the Nigerian Armed Forces.

“The President joins Vice Admiral Akhigbe’s family, colleagues and subordinates in the Nigerian Navy, friends, associates and all who knew him in mourning the former Chief of General Staff.

Jonathan said while Akhigbe might have left the world of the living, he would live on forever in the hearts and minds of all whose lives he touched positively during his long and remarkable career of national service in military commands and in the political offices he held as a military officer.