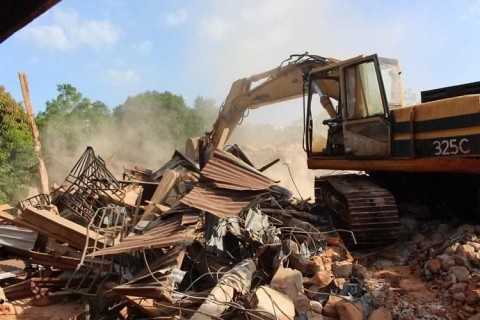 LAGOS, NIGERIA (AFRICAN EXAMINER) – The Lagos State Government on Tuesday began the demolition of structures under high tension lines across the State, with 350 shops and structures first being brought down.

This follows the expiration of ultimatum issued the affected property owners – who built their houses under high tension line to vacate.
The removal began with the demolition of illegal row of shops situated directly under high tension lines at Isheri in Egbe-Idimu Local Council Development Area (LCDA), of the State at around 10.00am on Tuesday.

Commissioner for Physical Planning and Urban Development, Anifowoshe Abiola, who expressed government’s determination to rid the State off illegal developments said: “This is just another effort to maintain a sustainable, organized, liveable and friendly environment. The State Government has established zero tolerance for all structures and properties built under high tension cables across the State.

“Having residential buildings or conducting business under high tension power lines constitutes a danger to lives and properties that could have fatal consequences. The State Government, through its relevant Ministries and agencies will henceforth, enforce applicable law strictly by removing all development and activities encroaching on the right of way of utilities and services.”

Acting General Manager, LASBCA, Oladotun Lasoju, said the Lagos State Urban and Regional Planning and Development Law 2010, did not only prohibit building under the centre-line of over-head electricity wires, but also in very clear terms specified the distance to be observed between a property and a public utility such as high tension cables.

The Chairman of the Lagos State Task Force, SP Olayinka Egbeyemi confirmed that 350 structures were demolished, warning residents and traders to desist from living and trading under high tension, adding that those affected were served adequate statutory notices before the demolition exercise.

According to him, residents and traders were allowed to remove their goods and properties before the demolition.