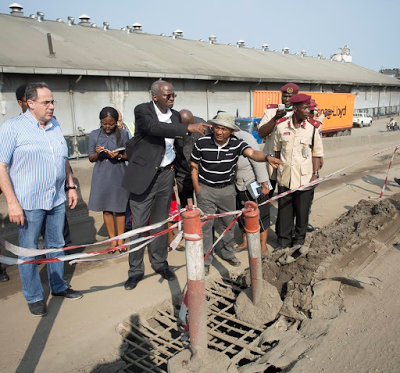 The repair work according to a statement from the State Commissioner for Transportation, Dr. Dayo Mobereola would be carried out by contractors of the Federal Ministry of Works.

Dr. Mobereola  said the emergency and immediate closure of the bridge was to also allow the Federal Ministry carryout studies to determine the state of the bridge and effect appropriate repairs.

“While the Federal Ministry of Power, Works and Housing has assured of immediate action towards repairing the bridge as it may deem fit, the Lagos State Government is committed to putting in place effective traffic management strategies that will mitigate the impact of the closure,” he said

Consequently, the State government has announced alternative routes that could be used by commuters.

In a statement issued by the State’s Ministry, traffic coming from Wharf Base/Point Road should divert at service Lane (Marine Beach Road) by Leventis Junction to link Lilly Pond by Dockyard and ascend Ijora Bridge to continue their journey.

It added that motorists traveling to Ajegunle should take a left turn at the second junction under the Apapa Road Bridge to Marine Beach junction inward Ajegunle or back to Ijora bridge and continue their journey.

The government warned that the options were not to be used by heavy duty vehicles.

The state government also implored the National Union of Petroleum and Gas Workers (NUPENG) and its members to observe the re-route, so as not to block the road when accessing the tank farms at Lilly Pond.

“The state government has among other initiatives deployed various signages directing traffic appropriately. It is equally important to ask motorist to please obey personnel of the Lagos State Traffic Management Authority (LASTMA), Federal Road Safety Corps (FRSC), Nigeria police and other law enforcement agencies deployed to control and manage traffic in the area. This is in our collective interest,” it said.