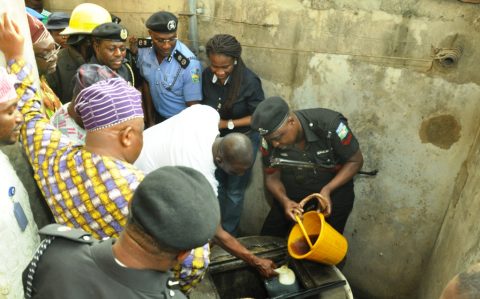 The Lagos State Government has shut 12 houses in Ilasamaja area of the State over discovery of shallow oil wells built by landlords to illegally scoop diesel from pipeline belonging to the Nigerian National Petroleum Corporation (NNPC).

The oil wells were said to have been built for the purpose of illegally scooping diesel and selling same to members of the public, while some of the affected landlords built pumping machine and bore hole to perpetrate the crime on a large scale.

The State’s Commissioning for Information and Strategy, Mr. Steve Ayorinde who confirmed this while briefing newsmen at the Lagos House, Ikeja, said the step to shut the wells and condone off the area was taken by government to forestall loss of lives and property as a result of the looming danger.

Ayorinde, who addressed journalists alongside top government functionaries and the Lagos State Commissioner of Police, Mr. Fatai Owoseni, said a combined team from the police command, the Ministry of Environment, Lagos State Environmental Protection Agency, Lagos State Fire Service and Sole Administrator of Isolo Local Council Development Area carried out a thorough inspection of the entire area and discovered nothing less than 12 of the illegal oil wells.

He said that initial investigation revealed that a few of the landlords where the wells are located were taking advantage of the situation by commercializing the dangerous act.

He said that samples of the substance have been taken for immediate investigation in order to determine the true nature of the substance as well as the root cause of this usually occurrence.

He said the State Government was working with the NNPC for further investigation.

Ayorinde said that for the safety of residents, especially on Abeokuta and Ibadan Streets, the affected well have been sealed off, adding that the government would also work with those who are likely to be displaced as a result of the development.

“The Lagos State Government wishes to use this opportunity to remind Lagosians and the residents of these areas in particular, to assist the police with useful information and to urge them to always volunteer information before any potentially dangerous situation degenerates to public hazard,” he said.

Also speaking the Commissioner of Police confirmed the arrest of three suspects in the operation, adding that a fire tanker has been stationed in the event of any fire incident.

The men of the Lagos State Police Command in the area who were on routine patrol said they saw a woman around 12 midnight with keg of diesel and when an attempt was made for her to be accosted, she fled, a development which alerted the police of something fishy.

The police immediately pursued the woman and accosted her, after which she eventually took them to number 12, Abeokuta Street, off Ilasamaja, one of the houses housing the illegal oil wells.

Upon getting to the said house, those inside shut the door and prevented the police from gaining entrance.

The officers thereafter left the scene with the arrested woman, and they later came back disguising as potential buyers of diesel, while those inside opened the door.

It was at that point that the illegal oil well was discovered at the house, after which about ten more wells were discovered in other houses in Abeokuta and Ibadan streets.