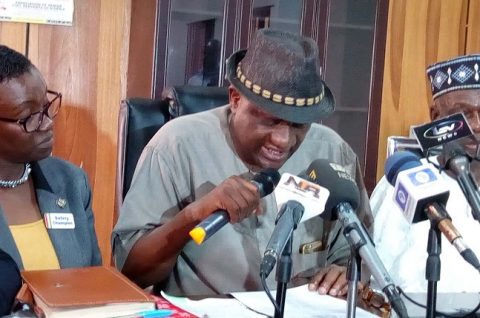 (AFRICAN EXAMINER) – The Director-General of Lagos State Safety Commission, Hakeem Dickson, has urged individuals and organizations to imbibe simple safety procedures because the cost of repairing and re-organising in the course of an accident outweighs the cost it will take to prevent the accident.

Dickson stated this at a press briefing on 9ja Safe Awards 2017 held Alausa on Monday.

He said the LSSC since its inception has embarked on massive and rigorous campaign to orientate the public on the need to embrace safety in every facet of their lives.

He said: “The commission spearheaded the injection of safety in the curriculum of all the Technical Colleges in the state and has also developed school safety and compliance manual.

“We have also engaged consultants who are qualified in different domains to assist us in ensuring that all organisations conform to lay down safety laws, regulations and measures in their day to day business.”

Dickson also stated that the commission intends to introduce compusory insurance of all buildings in the state with the assistance of insurance companies and the National Insurance Commission.

Also, the Director and Enforcement, LSSC, Aderonke Odeneye, urged the public to endeavor to report safety infractions to the commission by becoming “hazard identifiers”.

Odeneye said this will enable the commission to quickly identify accidents before they occur. 9JA Safe Awards is organized by Safety Record.

The main objective of the award is to recognize and encourage outstanding performances of individuals and organizations towards raising and promoting safety consciousness among Nigerians.

The award will take place on September 8, 2017 at Lagos Oriental Hotel. Nomination will begin from April 11 and closes on May 9, 2017.