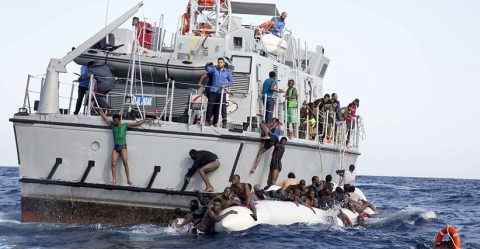 (AFRICAN EXAMINER) – The International Organisation for Migration (IOM) has said that 184 illegal immigrants were rescued by the Libyan Coast Guard off the country’s western coast on Sunday.

IOM tweeted: “184 migrants, among them 14 women and 11 children, were returned to Tripoli in Libya by the coast guard.

The number of illegal immigrants rescued off the Libyan coast have increased significantly over the past few days, with the Libyan Coast Guard rescuing hundreds of immigrants, including women and children.

The fall of the previous Muammar Gaddafi’s government in 2011 has created a state of insecurity and chaos in Libya, which made it a preferred point of departure for migrants to cross the Mediterranean Sea towards European shores.

Shelters in Libya are overcrowded with thousands of illegal immigrants, mostly Africans, who were either rescued at sea or arrested by authorities, despite repeated international calls to close those centres.

The IOM has repeatedly stressed that Libya is not a safe point of disembarkation for migrants or refugees.