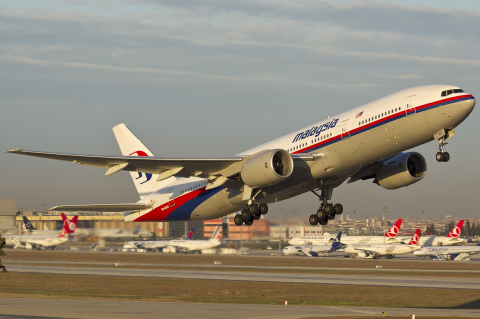 (Reuters) – A missing Malaysian airliner was likely to have been deliberately steered to a course that could have taken it anywhere from central Asia to the southern Indian Ocean, Malaysia’s prime minister said on Saturday. 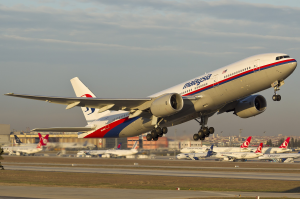 Minutes after Malaysian leader Najib Razak outlined investigators’ latest findings about flight MH370, police began searching the house of the aircraft’s 53-year-old captain for any evidence that he could have been involved in foul play.

The Malaysia Airlines Boeing 777-200ER vanished from radar screens a week ago with 239 crew and passengers aboard.

Najib, giving his first statement at a news conference since then, confirmed reports that investigators believe somebody cut off the plane’s communications and steered it west, far from its scheduled route to Beijing.

“In view of this latest development the Malaysian authorities have refocused their investigation into the crew and passengers on board,” he said.

“Despite media reports the plane was hijacked, I wish to be very clear, we are still investigating all possibilities as to what caused MH370 to deviate.”

Search operations by navies and aircraft from more than a dozen nations were immediately called off in the Gulf of Thailand and the South China Sea to the east of Malaysia, where the plane dropped off civilian air traffic control screens at 1:22 a.m. last Saturday (1722 GMT on Friday).

India stepped up its search in two areas at the request of Malaysia – one around the Andaman and Nicobar Islands and another further west across the Bay of Bengal – but found no evidence that would indicate that the plane had come down in its waters, the Defence Ministry said.

A senior military official in Port Blair, capital of the archipelago, said Indian aircraft had combed waters stretching up to 300 nautical miles offshore and overflown all 572 islands in the chain but “we don’t have anything so far”.

India’s Eastern Naval Command was investigating a separate rectangular ‘box’ 15 km wide by 600 km long, some 900 km east of Port Blair, but had found nothing.

Malaysia’s said new data showed the last communication between the missing plane and satellites at 8:11 a.m. (0011 GMT), almost seven hours after it turned back and crossed the Malay peninsula.

The data did not show whether the plane was still flying or its location at that time, presenting searchers with a daunting array of possible last locations. Seven hours more flying time would likely have taken it to the limit of its fuel load.

“Clearly, the search for MH370 has entered a new phase,” said Najib, whose government has come under criticism for its slow release of information surrounding what is one of the most baffling mysteries in aviation history.

About two-thirds of the passengers on board the flight were Chinese, and Beijing has been showing increasing impatience with the speed and co-ordination of the Malaysian search effort.

On Saturday, China said it had demanded that Malaysia keep providing more thorough and accurate information, and added that it was sending a technical team to Malaysia to help with the investigation.

China’s Xinhua state news agency said in a commentary that Najib’s disclosure of the new details was “painfully belated”.

“And due to the absence – or at least lack – of timely authoritative information, massive efforts have been squandered, and numerous rumors have been spawned, repeatedly racking the nerves of the awaiting families,” it said.

The fate of flight MH370 has been shrouded in mystery since it disappeared off Malaysia’s east coast less than an hour into its March 8 scheduled flight from Kuala Lumpur to Beijing.

But investigators have increasingly discounted the possibility of an accident due to the deliberate way it was diverted and had its communications switched off.

Investigative sources told Reuters on Friday they believed the plane was following a commonly used navigational route when it was last spotted early on Saturday, northwest of Malaysia.

Their suspicion has hardened that it was flown off-course by the pilot or co-pilot, or someone else with detailed knowledge of how to fly and navigate a large commercial aircraft.

No details have emerged of any passengers or crew with militant links or psychological problems that could explain a motive for sabotaging the flight.

The experienced captain, Zaharie Ahmad Shah, was a flying enthusiast who spent his off days tinkering with a flight simulator of the plane that he had set up at home, current and former co-workers said. Malaysia Airlines officials did not believe he would have sabotaged the flight.

The 27-year-old co-pilot Fariq Abdul Hamid was religious and serious about his career, family and friends said, countering news reports suggesting he was a cockpit Romeo who was reckless on the job.