ASUU Condemns Attempt By ESUT To Use Military To Conduct Exams 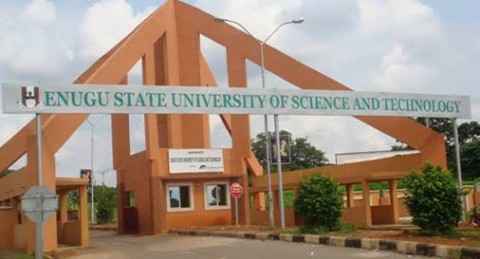 (AFRICAN EXAMINER) – The Nsukka Zonal chapter of the Academic Staff Union of Universities (ASUU) has condemned the  alleged attempt by  the Vice chancellor of Enugu State University of Science and Technology (ESUT) Professor Charles Eze  to use military to conduct internal examination  in the institution.

The Zonal Coordinator of the body Dr. Igbana Ajir, made the Union’s position known on the issue on Friday in Nsukka while addressing newsmen shortly after their zonal meeting.

Dr. Ajir, stated that inviting military men during students 2019/2020 first semester examination recently by the VC and school management is not only barbaric but negates the civil university traditions.

According to him, “the attempt to use military men to force students to write examination in ESUT is totally unacceptable and condemnable.

“The union will not hesitate to deploy relevant instruments to sanction ESUT if the institution continues pressure and deny of salary to our members who opposed this uncivil act.

The Zonal leader, however, listed some of the demands of ASUU to include adequate funding to revitalise public universities, earned academic allowances, proliferation of universities and poor funding of state universities.

Also, government’s failure to implement the 2009 Federal Government and ASUU 2013 Memorandum of Understandings with government was not for the interest of the nation.

He insisted that ” Until government reasonably meet these ASUU demands, this strike will not be suspended because government agreed and signed to meet all of them, ” he stated.

The zonal chairman accused Chief Chris Ngige the Minister of Labour and Productivity and Mr Chukwuemeka Nwajiuba, Minister State for Education of feeding the  public with intentional lies.

He said “this press briefing is called to intimate members of the press and the general public of the deliberate deceit, frustration towards frustrating genuine steps by ASUU to forestall the total collapse of public universities.

“Instead of the affected ministers to find ways of meeting ASUU demand’s so that public universities will resume they have resorted to feeding the public with intentional lies which will make the strike to linger.

ASUU, it would be recalled, embarked on nationwide indefinite strike on March 23rd, with a view to compelling the Federal government to meet its demands.