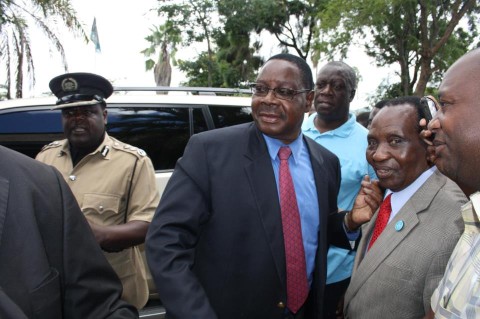 Newly elected Malawian President, Peter Mutharika has named his 20-member cabinet overnight, with a prominent opposition leader after over a month of chaotic elections that brought him to power.

The cabinet includes United Democratic Front Presidential candidate, Atupele Muluzi, who came in fourth in the disputed May election as a Minister of Natural Resources, Energy and Mining.

Similarly, a son of Former President Muluzi was named and remains the only opposition lawmaker in Mutharika’s cabinet. Muluzi briefly worked as economic planning Minister under ex-leader Joyce Banda before he quit to pursue his Presidential bid.

Former Finance Minister, Goodall Gondwe was appointed and maintains the same portfolio while several other old faces who worked under the administration of his sibling, Bingu wa Mutharika, who died in office in 2012 has equally been invited on board. The President has also named former and veteran state Secretary, Bright Msaka as Minister of lands, Housing and Urban Development.

“The president has lived to his word to have a cabinet of not more than 20 ministers and deputies in order to cut costs,” state house Press Officer, Justice Mponda, told AFP after the release of new full list.

Mutharika, who is the Commander-in-Chief of the armed forces, has combined the defence Ministry to his portfolio.

Vice President Saulos Chilima will be in charge of 170 000 civil service and parastatals. The whole cabinet has only two deputies, namely, Vincent Ngambi for education and Jampi Mhango, for defence.

Meanwhile, Former official of the International Monetary Fund (IMF) and Finance Minister Gondwewill is billed to present his budget in September, instead of the traditional July to allow wide consultations.

Sources told African Examiner that donors, who bankroll up to 40 per cent of the country’s development budget, have suspended aid worth $150m until the government cleans up the

mess of more than $30m looted from state coffers in six months in the Cashgate scandal during Mutharika’s predecessor,  Banda’s era.