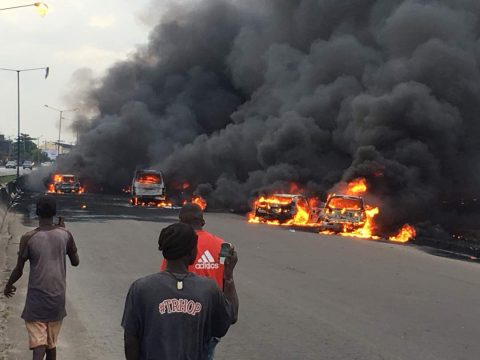 (AFRICAN EXAMINER) – Many people were killed, while scores of vehicles burnt Thursday evening, when a petrol tanker went on fire on Otedola Bridge, along Lagos-Ibadan expressway.

The truck was outward Lagos when the sad incident occurred.

Reports said the officials of the Lagos State Emergency Management Agency LASEMA, Lagos Fire Service as well as RRS were mobilized to the scene to manage the situation.

The fire reportedly involved a fuel tanker and about 30 vehicles.

Although, the inferno has been brought under control, but many people were believed to have been trapped and killed while it lasted.