No Hijab, No Vote For APC in Lagos, Muslim Group Threatens 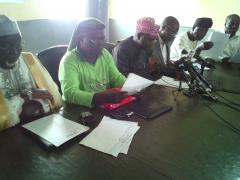 Rising from a news conference on Thursday, Muslims in Lagos State say they will not vote for the All Progressive Congress (APC) in Lagos if the party refuses to allow female Muslims to wear hijab in public schools.

At the conference held in Ikeja, Nigeria organised by the Joint Muslim Forum (JMF), the Muslims said Lagos Governor, Babatunde Fashola has really failed the Muslims community in the state by singlehanded going against hijab.

According to the spokesperson of the groups, Adewale Shonaike, “having been pushed to the wall, the Muslims of Lagos State have no alternative that to use what they have to get what they want. We have resolved to give our votes to any candidate from any political party that is ready to grant us religious freedom. We will vote for those who will approve the use of hijab in schools no matter their political affiliation. This suffering is too much. Lagos State Government treats Muslims with disdain. Enough is enough. Our slogan for Lagos 2015 is therefore: ‘No Hijab, No Vote.”

On the judgement of the Shonaike said “the ruling is therefore illogical, inexplicable and a total miscarriage of justice. The learned judge erred by averring that hijab creates a sense of inferiority in those who do not use it. It is laughable,” he said.

He said hijab was being used in the UK, US and other western countries where Muslims were in the minority, adding that Ekiti, Oyo and Osun States allowed their students to put on hijab, but lamented that the Lagos State Government had refused to allow this to happen in its school as the government did not like the Muslims.

The JMF spokesman urged the Lgos State Government to voluntarily ignore the judgment and uphold the right of female Muslim students by issuing directive to school heads and principals to allow use of hijab to students who subscribed to it.

“In this way, the government would have shown that it is father to all and does not alienate any section of the community. This step does not in any way offend the so-called Nigeria’s secular nature as provided for in Section 10 of the constitution,” he added.

Shonaike added that if the government went ahead to implemented the judgement, it was capable of creating avoidable tension and crisis and thereby destroyed the peaceful co-existence and religious tolerance which the State currently enjoyed.

“We are not in doubt whatsoever that some overzealous teachers, school heads and principals will take full advantage of the judgment to taunt and victimise female Muslim students as witnessed in the recent past,” he said.

JMF also denounce the call for emergence of Christian governor in the state in line with religious affiliation, saying that the overwhelming majority of Lagosians have rejected this divisible and parochial call, noting that it was undemocratic and disgraceful desperation for power which raised questions about the motive behind such call.

“We at the JMF reiterate our rejection of such campaign and call on Lagosians to reject any candidate that emerges on account of subterranean or disguised religious sponsorship. We enjoin Lagosians once again not to allow mediocrity and religious sentiment to becloud their sense of reasoning in the choice of the candidate they will elect to govern the state,” Shonaike said.

He said despite the rejection of such idea, the proponents of a Christian governor did not desist as they appeared bent on religious crisis and disharmony in the state, saying that they had carried their campaign to the major political parties and have ‘anointed’ candidates for the parties.