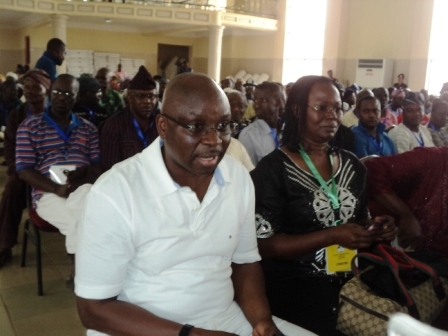 ABUJA, NIGERI (AFRICAN EXAMINER) – A Federal High Court sitting in Abuja has granted bail to a former ally of Ekiti State Governor, Ayodele Fayose – Mr. Abiodun Agbele as he is currently standing trial over his role on the alleged N4.6billion allegedly used to prosecute Fayose’s election in June 2014.

Ruling further on the bail, the judge held that the accused bail application was granted as the prosecution failed to substantiate his argument that the defendant would jump bail if regained his freedom.

“Citing Section 162 of the Administration of Criminal Justice Act (ACJA), Justice Dimgba noted that the allegation against Mr. Agbele attracts three years imprisonment, yet, he is obligated to release an accused charged within the “threshold of the penalties referenced above to bail”.

However, the judge held that in case the prosecution was vindicated, the accused would forfeit the N500 million – his bail bond to the Federal Government.

Other conditions of the bail is that the sureties could either be private businessmen, professionals or civil servants, while such must not be lower than a director cadre if in the public service.

Justice Dimgba added that the sureties must also be owners of property within the Federal Capital Territory Abuja; Ikeja or Victoria Island, Lagos.

Agbele is being arraigned by the Economic and Financial Crimes Commission (EFCC) on 11-count charge including money laundering. He allegedly received over N1 billion in Akure, the Ondo State capital on behalf of Fayose from a former Minister of State for Defence, Musiliu Obanikoro, to execute the Saturday, June 21, 2014 Ekiti State Governorship election said to be won by Fayose.