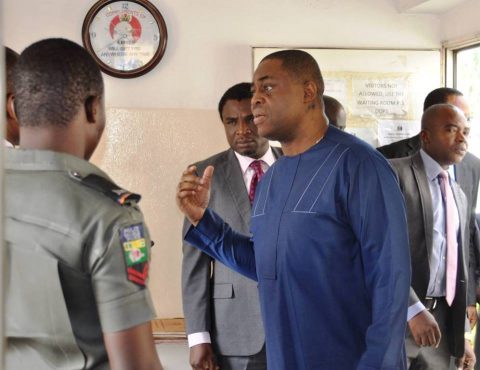 Fani Kayode has been held by the EFCC two weeks ago and he is being investigated over his part in the alleged N1.5 billion fund expended by the former President Goodluck Jonathan Campaign organization last year.

The former Minister who was the Director of Media and Publicity of the Campaign body was alleged to have received the sum of N840 Million from the campaign money.

It would be recalled the EFCC less than a week it invited Fani-Kayode sought an order to hold the former Minister. The application was granted for two weeks and it was renewable.

The EFCC, prayed the magistrate to grant an order to keep Fani-Kayode in its custody pending when the accused is arraigned before a proper court of jurisdiction after its operatives’ investigation.

At the Monday hearing, Counsel to the anti-graft agency Mr. A.N. Anana, told the magistrate that the order being sought to remand Fani-Kayode was in line with the provisions of Section 261 of Administration of Criminal Justice Law of Lagos State, 2011.

He referred to his client’s letter dated May 10, 2016 on the application. The Counsel argued that the motion which was attached with a nine-paragraph affidavit of urgency deposed to by Tosin Ngbodagha, for remand was in pursuant to Section 261 of ACJL.

However, Counsel to Fani-Kayode’s Mr. Wale Balogun, countered the EFCC and accused it of breaching the constitutional rights of his client.

He contended that EFCC has earlier granted Fani-Kayode an administrative bail on May 12, 2016.

Mr. Balogun also argued that the EFCC ought to have released his client since the lapse of two weeks first remand order granted by an Abuja Chief Magistrate.