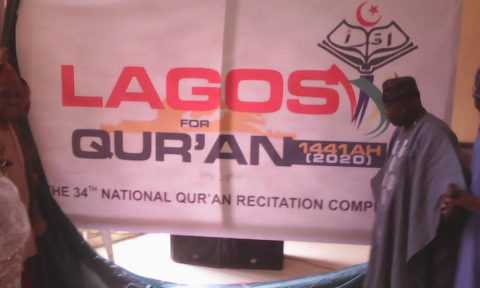 (AFRICAN EXAMINER) – The Muslim Community of Lagos State has called on well-meaning individuals and organizations to support it, in raising N290 million for a successful hosting of the the 34th National Quran Recitation Competition.

The Chairman, Local Organizing Committee (LOC), Otunba Abdul Fatai Olukoga made the call in Ikeja, the Lagos State capital, while addressing press conference to usher in, the competition organized by the Centre for Islamic Studies,Uthman Dan Fodio University, Sokoto.

The Chairman thanked the Sultan of Sokoto, Alhaji Abubakar Sa’ad, Oba of Lagos, Riliwan Akiolu, as well as prominent Islamic scholars within and outside Lagos State over their support so far, for the success of the competition.

He called on other Nigerians to join in the ‘’laudable effort and stand to be counted’’.

While speaking on the significance of the competition, Otunba Olukoga said memorization and recitation of the Quran was another veritable means to take the youths out of the streets and subsequently engage them ‘’productively’’.

Apart from making the contestants to understand and master the best method of recitation, the LOC Chairman stressed that the exercise would assist the Muslim community, government and society in general, to appropriately pre-occupied the youths and discourage them from involving in restiveness and various society vices.

According to him, both the formal opening and grand finale of the competition will hold at the Teslim Balogun Stadium, Surulere, on December 24, 2019 and January 4, 2020 respectively, while recitations/competitions are scheduled to hold at the University of Lagos (UNILAG), Akoka

The competitions, Otunba Olukoga disclosed would hold in six categories, each for male and female competitors. Each participating States, he added would field contestants in maximum of five categories – for both male and female.

In an interview with the AFRICAN EXAMINER, Otunba Olukoga who affirmed that the stakholders were working on including long-terms rewards, such as scholarship for winners, corrected impression that the mobilization for the competition was lopsided.

He contended that the publicity was well localized and widely publicized across the State, insisting that those who were complaining might be the institutions with poor knowledge or lack competence to effectively compete.

Each State of the Federation is expected to send maximum of 10 contestants. Over 600 participants are expected to be part of the event.

While responding to questions from journalists, the LOC Vice-Chairman and Chairman, Fund Raising sub-committee, Alhaji Abdul Rafiu Ebiti, admitted that the appropriated budget of N290 million for the one-week event was huge and difficult to raise, given the present downturn in the Nigeria’s economy.

Alhaji Ebiti however declared that despite the difficult times, the LOC was undaunted and hopeful that the budgeted figure would be raised in good time and prior to the National exercise.

The star prizes according to the organizers include Kia Hyundia; Tricycle; N1m cash among others.

Lagos State hosted the competition for the first time in 1992.

The high point of the press conference was the unveiling of the official logo of the competition. The trademark which comprises the Lagos State’s flag, a quran and crescent atop was described by the designer, Alhaji Ridwan Osinowo as a ‘’name logo’’.