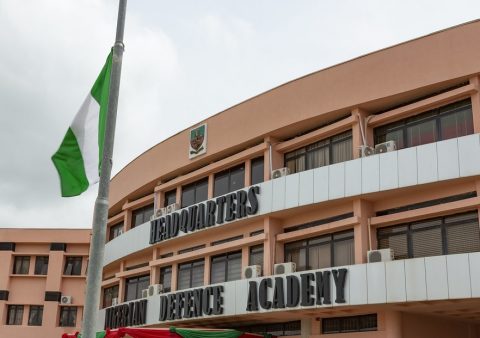 (AFRICAN EXAMINER) – The Nigerian Defence Academy (NDA) has appointed Prof. Adam Ahmed as the new acting Academy Provost (AP).
The Public Relations Officer of NDA, Major Abubakar Abdullahi, made the announcement in a statement issued on Tuesday in Kaduna.

Abdullahi said that Ahmed’s appointment was sequel to the termination of the tenure of the former acting AP, Prof. Usman Muhammed, recently.

Between 1981 and 1983, he attended Kwara State College of Technology and School of Basic Studies, Ilorin and later, Bayero University, Kano between 1984 and 1987, where he bagged a bachelor’s degree in history, emerging as the best graduating student.

Ahmed, who became a professor in 2009, was a recipient of a string of awards/prizes/fellowships, both at home and abroad.

Some of these, the statement said, included being a lecturer and founder of Security History, published books and contributions in high impact local and international journals, cited in Scopus, ISI, Google.

Ahmed also won the Michael Crowther Prize for the Best Graduating Student in History, BUK in 1987.

He had served severally as Chairman, NUC accreditation teams to many universities, including Ekiti State University, Ado Ekiti and the Federal University, Wukari, among others.

He has over 100 publications in forms of books, chapters in books, journal publications, joint reports and projects.

Ahmed was the pioneer Director of Linkages and Collaboration before his new appointment.

He is the Chairman and Pro-Chancellor of Kogi State University, Anyigba and Chair of Chairmen of Kogi State tertiary institutions.

“His management skills and engagement capacity saw to the return of the state tertiary institutions after excruciating six months industrial disputes with the government in 2017,” Abdullahi said.