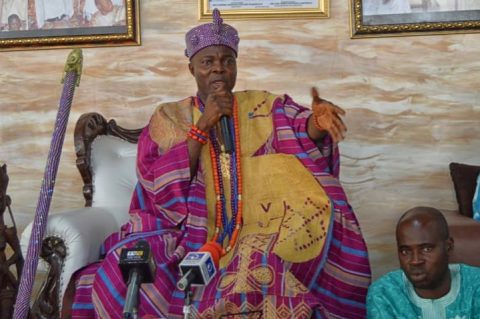 …Urges Politicians to Leave Military Out of Partisan Politics

(AFRICAN EXAMINER) – As the countdown to Nigeria’s 2019 presidential election holds in February 16 to elect Africa’s most populous black nation’s president between the two main contenders, incumbent President Muhammadu Buhari under the aegis of  All Progressives Congress (APC) and Atiku Abubakar, a former Vice president representing Peoples Democratic Party (PDP) passionate appeal has been made to members of international community as well as religious leaders to throw their weight behind the on-going fight by Nigerian military to eclipse the menace of terrorism in the country.

Making this position known while addressing journalists in Osun state which had in attendance Traditional Rulers across the South west, Security Analysts and academia in international relations,  a first class royal monarch, the Olowu of Owu-Okuta, Oba Adekunle Oyelude Makama, Tegbesun III, has warned politicians not to drag the Nigerian military into politics, raising fears on pressure being mounted on the army, thereby over-heating the polity.

The royal monarch explained that majority of Traditional rulers in the country believe in the abilities of Nigeria’s Chief of Army staff and Chief of Air staff for their various innovations, transparency in the running of the military affairs and sustaining  a continuous battle against terrorists’ activities in Northern part of the nation.

“Based on my status as traditional ruler who must always be seen as father of the nation, I will not go into the specifics on different pressures allegedly mounted on the military, especially the Army, but which the military persistently resisted,” states the traditional ruler of Owu–kuta, Osun State.

Makama, who received journalists at his palace said the move is anti- democratic.

In his words: “Through my consistent observation of our political activities since the return of civilian rule in 1999, I have come to a realisation that opposition parties are fond of accusing incumbent of using the military to suppress it before, during and after general elections, with the Army being the worst hit.

There is no doubt that this development is unhealthy for our nascent democracy and nation building. It is noteworthy that it creates unnecessary tension in the polity just as it also reduces the military to a dispensable tool in the hands of political class.”

The royal father, who could be seen holding back some privileged information at his disposal on how some politicians are allegedly mounting pressure on the military, especially the Nigerian Army to carry out partisan activities, commended the leadership of the Army for resisting external influences and performing their duties as patriotic Nigerians. The Olowu Kuta says majority of the Traditional Rulers in the Country believe in the abilities of the chief of Army staff and The chief of Air staff.

On the strength of Nigerian army, he said: “I am appealing to our political parties, as we go into the next general election, to leave the armed forces out of their build-up. Without any fear of contradiction, the armed forces is not only the symbol of our national unity and cohesion, it is also the defenders of our territorial integrity as its personnel sacrifice their comfort for our peace.”

He appealed to every Nigerian irrespective of religious, political and ethnic leanings to support the military in the fight against insurgency, in order for the strides made in the war to be visible to all.

“As I have said before now, our troops need our individual and concerted support through prayers and positive comments. A situation whereby their efforts are greeted with scornful remarks would naturally kill their morale and also incapacitate their spirit to fight and get desired results,” he said.

Makama also warned Nigerians to be weary of external forces who masquerade as human rights organization but are agents of destabilization while he challenged the Independent National Electoral Commission (INEC) to be fair in their conduct of the forthcoming general elections.