Nigeria to be Hub of African Maritime –Peterside 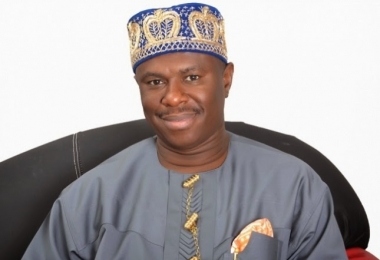 The Director General of the Nigerian Maritime Administration and Safety Agency (NIMASA), Dr. Dakuku Peterside has reiterated the Agency’s commitment to ensuring that Nigeria becomes the hub of maritime activities in Africa, thereby making it a reference point in the continent.

The DG stated this when he officially took over from the former Acting Director General, Mr. Haruna Baba Jauro at the headquarters of the Agency in Lagos.

Dr. Peterside who observed that the Agency has competent personnel to drive the mandate of the Agency also called on Mr. Baba Jauro to always avail the Agency of his experience and expertise whenever the need arise.

“We will harness the vast potentials available in the Agency in order to make Nigeria a maritime hub in the West and Central Africa sub-region by implementing all international laws and conventions, increased enforcement of our mandate and build the necessary capacity for indigenous operators leveraging on the Cabotage Act” the DG stated.

He described the former Acting Director General of the Agency, Mr. Haruna Baba Jauro as an Ambassador of NIMASA to the Federal Government and called on him to continue to support the Agency whenever his services are needed.

In his comments, Mr. Haruna Baba Jauro expressed gratitude to God and the Federal Government for giving him the opportunity to serve the nation in the last three and half years and that he is ready to work for the success of the present Management anytime his services are required.

While welcoming the new DG, Mr. Jauro enjoined him to look through the Act that governs NIMASA as his guiding compass, while also noting that the Cabotage Act should be reviewed with a view to impacting positively on the indigenous operators.

It will be recalled that President Muhammadu Buhari recently appointed Dr. Dakuku Peterside as the Director General/CEO of the Nigerian Maritime Administration and Safety Agency (NIMASA), thereby replacing Mr. Haruna Baba Jauro as the substantive Director General of NIMASA.