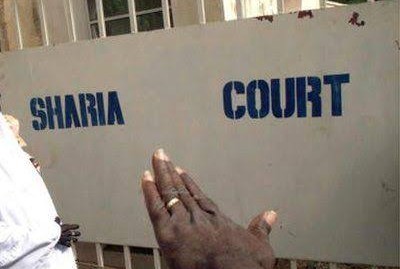 (AFRICAN EXAMINER) – As media reports filtered in about the sentencing to death of a kano-based SINGER, Yahaya Sharif-Aminu, for blasphemy, Nigerians have taken to their social media accounts to express their views.

According to reports, the musician was found guilty and sentenced to death by hanging over a song that was said to have allegedly ridiculed the holy Prophet Muhammad which circulated via WhatsApp in March.

The song sparked protests as an angry mob burnt his family home and according to report, his own biological father, Aminu Sharif, abandoned him as he went into hiding in the midst of the whole trouble.

However, an Upper Shari’a Court sitting in Kano on Monday, sentenced Yahaya Sharif-Aminu, to death by hanging after his conviction.

The death sentence has generated lots of controversies in the micro-blogging platform as many wonder why the Governor of Kano State, Ganduje, was not punished when he went against Sharia Law as he was seen in a video stuffing dollars in his pocket.

African Examiner captures some of these reactions below:

Amir Tsarfati@BeholdIsrael writes: “People write here that the Jews killed Jesus. Read your Bible! They wanted him dead accusing him for blasphemy, yet the terrible humiliation with the robe & crown of thorns as well as the unimaginable flagellation and crucifixion of Christ were all done by the Romans!”

Lidocaine @trending_medic writes: “I hope we’re not too distracted and forget that a man will soon be hanged for blasphemy. Let’s not forget our humanity.”

穆罕默德·哈迪 ➐@Tom_Harddy writes: “The Quran has 6,236 verses, none of which tell the faithful to stifle blasphemy by force.”

Omo kiikan @OmoKiikan writes: “Someone was sentenced to death because of blasphemy towards Islam and prophet Mohammed but boko haram members are granted amnesty”. Someone now said I should not pick #BBNaija over our government. Lmso.”

Wuod Japuonj@OsumbaJM writes: “BLASPHEMY fits in the bracket of sins God does not forgive. The Devil has cornered many Christians into that sin. Used & dumped now there’s no clemency for you! BUT there’s only one sure way to keep him at bay: The Blood of Jesus & the word of God. #HeavenlySundayService.”

Man of Letters.@Letter_to_Jack writes: “There’s no immunity for Governors under sharia law is there? How is Ganduje still being worshipped but an innocent guy has just been sentenced to death because of blasphemy?”

Wale Adetona@iSlimfit writes: “Sharia Law should be abolished in Nigeria. No man deserves to die for expressing their opinion. It’s so primitive to sentence a whole human life to death cos of blasphemy, all in the name of religion.”

AyeMojubar@ayemojubar writes: “Is Sharia Law supersedes Nigerian constitution? Even the supreme law of the land gives everyone a chance to fair hearing and freedom of expression. What is such law doing in a democracy? Did the person he blasphemed again complained or told them to help? Tanko Geng .”