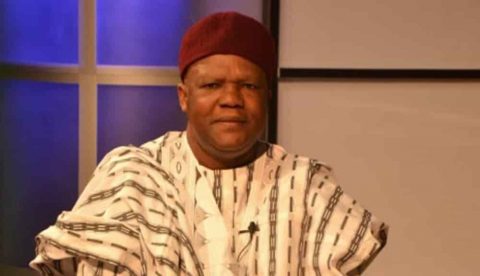 (AFRICAN EXAMINER) – Following a viral statement made by the former Deputy Governor of the Central Bank of Nigeria (CBN), Obadiah Mailafia, that a “Northern governor is the commander of Boko Haram” and his subsequent invitation by the DSS, Nigerians have gone on social media to express their views.

African Examiner recalls that Mailafia, while speaking with an Abuja radio station, 95.1FM, disclosed that Boko Haram is plotting to start a civil war in Nigeria by 2022 and part of the plan was to eliminate prominent Nigerians in their homes in Urban cities.

He had said: “The body language of this administration shows clearly that they have a hand in the killings, no doubt about it.”

The DSS have invited Mailafia to buttress more on his claims and this have sparked reactions from Nigerians in the micro-blogging platform.

AyeMojubar@ayemojubar writes: “Shocking Revelations from Dr Obadiah Mailafia’s intelligence network on Boko Haram / Bandits and their plans in 2022 – to start a civil war in Nigeria. He added that one of the current Northern governors is the commander of Boko Haram in Nigeria. #EnoughIsEnough.”

AyeMojubar@ayemojubar writes: “Our destiny as Southern Kaduna is no longer in the north, we shall never be northerners, we shall either stand on our own or join the south” – Dr Obadiah Mailafia. #EnoughIsEnough.”

Godwin ROBINSON@OdogwuGNR writes: “Did you listen to this man alleged “a particular northern governor is the commander of BH. That BH present agenda is in rural killings and very soon, they would start their urban killings, followed by a civil war” These allegations will send shivers down your spine.”

Godwin ROBINSON@OdogwuGNR writes: “Dr. Obadiah Mailafia is a former Director of Central Bank and a former Presidential candidate in Nigeria. He comes from Southern Kaduna. Listen to the video where he made it clear that boko haram has surrounded the whole country for final onslaught.”

The Son of Man@olufemisp writes: “States like Kano only complain about Islamic terrorism on media. In reality, they encourage them Just yesterday, Dr Obadiah Mailafia claimed “a northern governor is a major sponsor of Boko Haram.”

@NigeriaGov is not (only) unable, they are unwilling to protect the victims of #SouthernKadunaMassacre. The #BodyLanguage of the regime shows they own the #ElRuffian perpetrators of the massacres.”

@Ekwulu writes: “Dr Obadiah Mailafia is a well-bred technocrat and a former Deputy Governor of the CBN, he is not a frivolous individual.”

Chief Ojukwu@ChiefOjukwu writes: “When you make such allegations, don’t cry when you are invited to defend/prove it. “