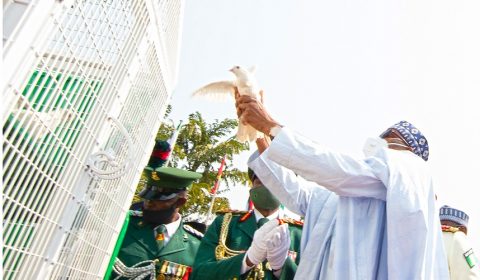 (AFRICAN EXAMINER) – The Special Adviser on Media and Publicity to the President, Femi Adesina, has sparked reactions on social media as he gives reason why the pigeons refused to fly during the Armed Forces Remembrance Day ceremony.

African Examiner reports that the pigeons did not fly after President Buhari released them from the cage. It is customary for pigeons to be released during important events as a mark of peace.

However,  when President Buhari released the pigeons, they refused to fly and many Nigerians reacted to this development as many saying that the pigeons not flying signified a “bad omen”.

Reacting to this development, Adesina in a statement on Thursday stated  that “When birds and some other roaming animals have been circumscribed for a while, they get accustomed to their new status as lawful captives. Therefore, when you offer them freedom, they first baulk, thinking it’s too good to be true. It’s a natural phenomenon.

Many Nigerians have since reacted to this development as they took to their social media account to berate Adesina for having time to respond to a  none issue.

African Examiner gathers some of their views below:

Abdul-Aziz Na’ibi Abubakar@jrnaib2 writes: “Femi Adesina explain why the pigeons refused to fly on the Armed Forces Remembrance Day, but Adesina couldn’t legit come out and explain why President Buhari failed to fight corruption, insecurity & unemployment as he promised buildup to 2015 elections.”

Umar Sa’ad Hassan@Alaye_100 writes: “The pigeons all took to the sky 2,3 mins later’-Femi Adesina… Does this man realize there are countless videos of what transpired that day?

God Promise@MASTER_P97 writes: “We know the pigeon issue isn’t a big deal but must Adesina talk always? Can’t he leave this talk to other aides? He just makes people angry every time.”

Ndi Kato@YarKafanchan writes: “Someone tell Femi Adesina he is right. Millions of jobs have been lost and we are jobless. He is not insulting us, he is literally agreeing with the failure of this administration.”

President One.acre|-| Dadiyata Disappeared@NekkaSmith writes: “If Nigerian Govt officials had any form of dignity or a little respect left to their names, 3/4 of Buhari’s cabinet should have resigned. Look at the likes of Lai Moh’d, Femi Adesina and Garba Shehu, they are hungry men who are not sure of their next meal. Disastrous.”

Ayemojubar@ayemojubar writes: “A perfect response from Femi Adesina. We are all pigeons in this country and “we have been kept in this cage for a very long time”. Cage of police brutality. Cage of oppression. Cage of desolation. Cage of dictatorship. Cage of exploitation. Cage of insecurity. Cage of hardship.”