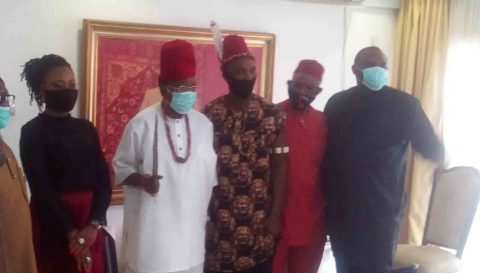 (AFRICAN EXAMINER) – Ahead of the 2023 general election, the former governor of old Anambra state, and founding member of the opposition Peoples Democratic party PDP Senator Jim Nwobodo, has declared that it is the turn of Southeast geo political zone of the country to produce Nigerian president of Igbo extraction.

He insisted that in the interest of justice, equity and fair play, political parties, electorates, and various parts of the country should  look the way of the zone during the election.

Nwobodo, a former Senator that represented Enugu East senatorial district at the upper chamber of Nigeria’s National Assembly (NASS), posited that any one who do not believe in the Igbo presidency project come 2023, do not wish Nigeria well.

He said: “2023, will be the turn of south East to produce the Nigerian president, so I am calling on  other parts of the country to support the project.

The Enugu state born Octogenarian politician, and one time Minister of Sports, stated this Monday at his Amechi, Awkunanaw country home, while receiving a chieftaincy title “Eziokwu bu ndu”  meaning (Truth is life), bestowed on him by the Traditional ruler of Amuri Ancient kingdom of the state, Igwe Charles Nwoye.

According to him, as a nation existing under a tripartite arrangement of North, East and West, it would be proper  for other segments of the country to throw their full weight behind the zone in its quest to occupy the highest  office  in the land, because it is the only geo political zone that has not had  its own fare share of the nations governance.

“For the interest of justice, equity and fair play, the South- East geo political zone of the country deserves to produce the next president that would succeed president Muhammadu  Buhari, in the next political dispensation.

He however, expressed appreciation to the Amuri, Monarch for the honour done him, stating that  the title Truth is life truly reflects what has been his guiding principle in life, saying “I continue to cherish and value this recognition, because truth remains life indeed. And its  coming from a nice and well respected  traditional ruler in Enugu state.

“I will continue to stand by the truth all the days of my life, because that is life. I thank Igwe Nwoye sincerely for this honour” he stated.

Presenting the title certificate and other regalia attached to it to  Nwobodo, Igwe Nwoye, who performed the exercise via the Crown Prince of Amuri Kingdom, who is also Enugu state chairman of All progressive Congress APC , Dr. Ben Nwoye, said the recognition was born out of the recipient’s contributions to the development of the state, during  his days as governor, particularly in the areas of education and youth empowerment.

Nwoye, who led other top cabinet members of the palace to the event said the Amuri Community holds Nwobodo, in a very high esteem going by his antecedents as a politician who believes in upholding truth at all times.