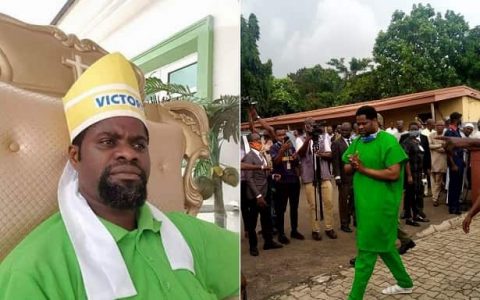 (AFRICAN EXAMINER) – The general overseer of Sotitobire Miracle Center, Akure, Babatunde Alfa and five others have been sentenced to life imprisonment over the abduction of Gold Kolawole, a one-year-old child, from the church.

The presiding judge, Olusegun Odusola, found the convicts on two-count charges of kidnapping, aiding and abetting to kidnap levelled against them.

Olusegun Odusola while delivering judgment on Tuesday, disclosed that the prosecution “proved circumstantial evidence” against the accused.

African Examiner reports that the one-year-old boy was reported missing in November 2019 when his mother dropped him off at the creche section of the church during a service.

When rumour emerged that the missing child was buried at the church’s altar, infuriated youths had set the church on fire.

The presiding pastor, Babatunde Alfa was later arrested after a petition of the missing child.