OPINION: Making The Best Out Of Steel Development, By Jide Ayobolu 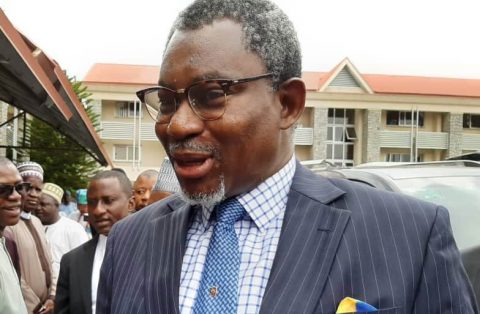 (AFRICAN EXAMINER) – Mr Olamilekan Adegbite, the Minister of Mines and Steel Development says President Muhammadu Buhari has given marching orders to his ministry for the completion of Ajaokuta Steel Company. Adegbite disclosed this in Abuja during an interactive session with newsmen on the proposed Nigerian solid minerals downstream workshop scheduled to hold Dec. 2. The minister who spoke through his Special Adviser on Special Duty, Mr Sunny Ekozin said the ministry had been working ’round the clock to actualise the ‘presidential directives’. “For the past three months, we have been doing everything possible to ensure we make progress and we are happy to let the nation know that the president has given us full backing in this assignment. “The support given by the president include political backing to ensure that Ajaokuta works and by the grace of God it will work soon,” he said.

The minister also said part of the directives by Buhari was for the sector to solve long intractable problems bedevilling the solid minerals and to ensure Nigeria could rely on the sector to diversify its economy. He said after articulating the problems for the past three months, the administration was on the path to harnessing the potential that abound in the minerals sector for the benefit of the people in the country. Adegbite explained that one of the steps taken was the current process of developing the Nigerian Downstream Mineral Policy. According to him, the policy is first of its kind in the history of the country. “The downstream mineral policy will trigger the nation with a clear diversification blueprint in a sustainable manner, especially for the revamping of Ajaokuta steel company. “And also effective harnessing of the abundant minerals endowment spread across the 36 states and the Federal Capital Territory (FCT). “As part of the process leading to the revamping of the entire solid minerals sector, we are sensitising key stakeholders, especially large investors of this novel initiative for the development of solid mineral downstream value chains. “This will help to create massive jobs, wealth and industrialisation.

Adegbite added that the ministry was determined and committed to ensuring that the president’s mandate was realised within the next three years. He said that the present government would stem the exports of jobs and wealth by unwittingly exporting 35 million of unprocessed mineral products annually. The minister pledged to open the sector to genuine indigenous and foreign investors to actively participate in the downstream licensing of mineral plants.

The steel plant which has 12,000 plots large, 68-kilometre road network and another 24-kilometre road network underground, was built four decades ago and has never produced any steel due to the dispute over the ownership of the Ajaokuta Steel Complex and Nigerian Iron Ore Mining Company (NIOMCO). The dispute made it impossible for the government to make any long‐term plans for the concession or privatization of the two companies. Ajaokuta is an inherited challenge. The Chief Olusegun Obasanjo administration gave it out on concession; the President Umaru Yar ’Adua government revoked it. And the case went to the London Court of Arbitration. Its resolution in 2016 led to the signing of the Modified NIOMCO Agreement, which ceded the complex back to the Federal Government and NIOMCO to Global Steel.

A steel complex which was supposed to have an installed capacity of 5 million tons a year. Situated on the Niger River, in Kogi state, its construction began in 1979 but work was delayed by the government’s failure to pay builders on schedule and it is yet to be completed. By 2004, when it was taken over by India’s Global Steel Holdings, then a subsidiary of Ispat Industries Ltd., it still hadn’t produced any steel. Global Steel’s concession was revoked in 2008. After an eight-year legal dispute, it was that the government will take over Ajaokuta. Nigeria’s Iron Ore and Steel sector Consumption of steel per capita per annum Kg/yr Nigeria currently lags behind global benchmarks on steel consumption per capita with potential to grow. Egypt, Brazil, Russia, China, South Korea and South Africa are great steel countries, so, also in India. South Korea’s demand for steel is largely fuelled by increased industrial activity, between 1965 and 1970, dramatic increase in demand for intermediate and capital goods (20kg to 175kg per capita per year) – Steel beams, flat sheets, rods, coils, bars – Rise in real estate development, construction of roads and bridges, fabrication, etc; Increased steel demand owing to increased industrialization – Building construction; power – Automotive construction; Agriculture – Road and bridge-building; Military – Refinery investments – Machinery for rubber and plastics, textiles, etc. South Korea leads the world due to high industrialization levels Nigeria can expect an increase in demand for steel in the coming decade driven by industrialization.

Nigeria’s Iron Ore and Steel sector Nigeria’s domestically focused iron ore and steel strategy is driven by our ability to serve domestic demand, as well as the challenges in export markets today. Few global steel investors have the capacity to expand into Nigeria. China: ~60 million tons of steel capacity was mothballed in 2015 as part of a plan to reduce production capacity; that has had a knock-on effect on the global commodities market. Britain/Tata Steel: Decision by Tata to sell/shut down its UK branch has also signalled the end of British steel production which declined from 18M tons/annum to 8M tons/annum between 1988 – 2015; other European steelmakers are also challenged. Private Companies: Many steel producers and suppliers from Vale to Rio Tinto to BHP are struggling due to the downturn in commodity prices and excess capacity in markets; we anticipate continued cost-cutting to rebalance the market.

Therefore, Nigeria can build a world-class minerals and mining ecosystem designed to serve a targeted domestic and export market for minerals and ores. Nigeria will focus on rebuilding its minerals and mining and related processing industry in 3 phases. Phase 1: Win over domestic users of industrial minerals that are currently importing. Phase 2: Focus on expanding domestic ore and mineral asset processing industry. Phase 3: Return to global ore and mineral markets at a market competitive price point. Hence, Nigeria will seek to build a minerals and mining sector initially focused on using its industrial mineral endowment to support its industrialization; private investors will be facilitated to lead this charge, to this end, Nigeria will invest in a range of initiatives including infrastructure investments, technical and engineering capacity, regulatory reform, reorganization of the Ministry itself, and expansion of access to financing to drive sector transformation.

Recalled that, the ex-Minister of State for Mines and Steel Development, Abubakar Bawa Bwari has lamented that Nigeria spends up to $4.5 billion on steel imports yearly. However, despite the high cost of imports, he said Nigeria’s per capita was low compared to other developed countries. In his keynote address at the opening of the fourth national steel summit with the theme: “Diversification of the Nigerian economy: The Indispensable Role of the steel industry” held in  Ikeja, Lagos, Bwari said building local capacity to produce steel would correct this and help Nigeria diversify from oil. He said: “The economy expends about $4.5 billion on steel imports per year which could be saved if they can be produced locally. “Considering that the consumption rate of steel and other metal products is regarded as a major index of industrialization, it is obvious that Nigeria is seriously lagging behind, even by the standard of developing nations.

According to recent estimates, the annual per capita consumption of Steel in Nigeria is below 10kg while the corresponding world average stands at 208kg as at 2016.” Bwari said the Muhammadu Buhari administration was making efforts to address the deficit in steel and metals consumption by creating enabling environment for private investment in steel production. Based on research, he said the government had come to realize that the private sector produced better results than Government-owned enterprises. However, he said their performance was being limited by operational challenges, which he said the summit was out to address.

Recalled that, Nigeria spends about $4.5 billion (N887 billion) annually on importation of basic metals, made up of processed steel, aluminium products and associated derivatives consumed in the country, the former Minister of Solid Minerals Development, Kayode Fayemi, has said. Dr. Fayemi said the import comes to about 25 million tonnes per annum.

Also, failure to formulate a policy to encourage the growth of local steel industry to produce more materials needed in building and construction works, the nation will be losing as much as N600 billion yearly to the importation of such materials, particularly iron rods. The industry which is a key sector in Nigeria’s economy provides industrial items such as iron rods, barbed wires, coils as well as metal doors and windows and should be the bedrock of the nation’s industrialization. But due to long neglect over the years, the sector’s growth has been stunted resulting in over 80 per cent of materials used by the Nigeria’s construction industry being imported with the costs skyrocketing following the crisis in the foreign exchange markets.

The government should continue to create a conducive atmosphere for investment, more industries would be established, while jobs would be created. The growth of the sector means wealth creation for the citizens, conservation of foreign exchange arising from the use of locally produced products as well as increased revenue generation for government, resulting in the diversification of our country’s revenue base. The investment climate has been purposely made attractive by government to achieve enhanced steel production in the country.