OPINION: Of Ministerial Rating and Merit Based Cabinet By Olawale Rasheed 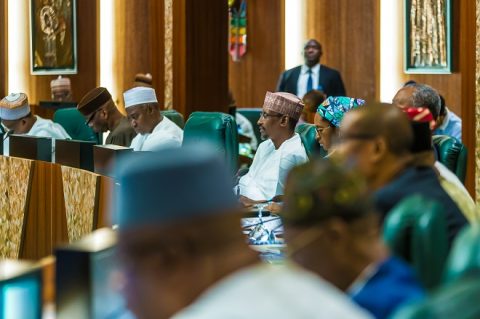 (AFRICAN EXAMINER) – Today the ministers had a valedictory gathering with President Muhammadu Buhari at the weekly Federal Executive Council meeting.By now,the President and his inner caucus must be shopping for new hands to take the nation to the next level as the ruling party has promised.Curiously,it is not too much to ask if a truly merit based cabinet membership is possible.

In the outgoing council is a mixture of the good ,the bad and the ugly.Some ministers demonstrated excellence in their operations;others are disasters that happened severally in the last few years.Some others are average in their performance.Another class of ministers are simply not present.I mean Nigerians cannot and dont even know if they are part of the cabinet.

The challenge in the last three and half years is that the cabinet was mere political matchup and patchup with political considerations determining inclusion and review of performance.The administration witnessed multiple hiccups arising from open incompetence of some ministers who cannot be sacked due to political considerations.If performance is to be rated ,many ministers contributed immensely to whatever negative rating the Buhari presidency earned in the cocluding first term.

Let do a quick review.Is there minister from Ondo state in the cabinet? If yes,what was his contributions? Is there any major policy contributions he made to the success of the administration? The minister of Health,Prof Isaac Adewole even earned a major rebuke in the last days of his service by the open criticism from the Natioal Assembly.The Minister of Communications, Adebayo Shittu allowed his ego questions to negatively rub off on what otherwise was a moderate performance at the communication ministry. His rigidity on mundane issues created a public image crisis ,leading to largely negative ratings.

The Minister of Labour,Chris Ngige was a total disaster both in term of output and conduct in the ministry.Controversies of all manners dogged his days at the Ministry, failing to introduce any major labour reforms and always perpetually at loggerheads with labour chiefs he was supposed to be managing.The Minister of Defence ,Dan Ali was clearly not in charge of the ministry.He was largely ceremonial leader without any innovative defence policy proposals or reforms.Somebody said most defence ministers are incapacitated.Yet,the case of Dan Ali was something else.The Minister of Trade and Investment,Okechukwu Enelamah swims in one controversy after the other in addition to his not so cordial relationship with his not so resourceful Minister of State from.Sokoto state.The case of special economic trade zone is particularly messy.

But there are ministers I designated as first class despite whatever shortcomings they may have.A particular super minister ,Babatunde Fashola performed well in many of the sectors under his watch.The records on road construction and rehabilitation was not bad. His housing schemes also received encouraging ratings from stakeholders. His albatross is probably the power sector.Internal politics within the sector combined with ambitious promises to undermine his ratings. He was also too political as he had to make political statements on issues that are purely technical in nature. He likely under-estimated the enormity of the challenge in the sector, making him to make assertions which to many Nigerians are out of tune with reality.Overall,the minister appeared overwhelmed.His ministers of state could not match him in with respect to capacity.

There is also the duo of Rotimi Amaechi and Hadi Sirika at the ministry of Transportation and Aviation.Sirika may be a bit aloof but the aviation sector witnessed good performance under his watch.Many projects were completed and he pushed for new landmark innovations.Being a professional, his mastery of the sector to push for aviation reforms is commendable.Yet,the aviation sector is still in need of further reforms.He made a few mistakes including the lack of detailed consultations on the Air Nigeria initiative.Over all,he remains one of the beat hands within the cabinet.

The transportation minister, Hon Amaechi has sterling records in the sector.Beyond the messy state of Rivers politics,even his enemies admitted that he delivered on many critical national projects under the sector.No one can dispute his glowing performance in the railway sector.In fact,he is the best railway minister the nation has produced in recent times.It is also correct to assert that Amaechi records in the transport are one of the major achievements of the Buhari presidency.

There are other performing ministers.The Minister of Water Resources ,Adamu Abubakar from Jigawa state is a silent achiever who has been assiduously working to reposition the water sector.For those who monitor development within the water sector,there is no doubt about Abubakar’s dogged commitment to raise the bar.The sector is already repositioned with moribund River basin authorities now functioning and .major dams being deployed for side agricultural purposes.

A general of general in the cabinet, Former Chief of Army Staff,AbdulRahman Dambazzau at the Ministry of Interior is equally doing well.When he was appointed ,he proposed an internal security archtecture which he argued is needed to strengthen internal security.He is however not the Minister of Defence and there is a limit he can push such agenda.Nonethelss ,Dambazzau has repositioned internal affairs Ministry for optimal performance.Agencies under the ministry are functioning more productively.

The Minister of Federal Capital Territory Adminstration, Muhammed Bello recorded one major achievement in the ministry-stoppage of land racketeering through extensive land management reforms.He also changed the negative image of the ministry as the home of corruption.He battled an entrenched cabal which over a long time perpetrated corrupt enrichment practices within the territory.His critics complain about his extra caution about spending within the ministry.Others question his strict moral code which they said is not amenable to a multi religious setting like Abuja. The undeniable fact about Mr Bello is that he represents a new dimension from entrenched corrupt cabal that for long dominated the FCTA.

For the Minister of National Planning, Udoma Udo Udoma,I covered him well enough as a Senator in those days.He seemed to have changed from a pushful reformer to a conformist without any revolutionary ideas.Others said he has decided to work in silence and to deliver on records.Many Nigerians will doubt such reasoning.The volume of his exposition as a Senator has not been reflected in his performance so far at the planning ministry.

Two ministries I wont review are justice and Petroleum except to add that Mr Ibe Kachikwu is a top flight professional who over played his hands and got reduced to size. But he is a performer except that he has another equally competent hand to work with in person of maikanti Baru,the Group Managing Director of the NNPC.As for the Justice Minister, we need deep justice sector reform especially under the next level.Malami is an entrenched player within the system.His records is mixed.Every government has the type of justice minister suiting its agenda.

The Minister of Agriculture, Audu Ogbeh is a minister in his own class.Brilliant no doubt but he has largely refused to comprehensively articulate his ideas and present same in a way that is not repulsive to Nigerians.His occassional policy outbursts are piecemeal and mostly presented in manners that rebuke the citizenry.His brilliance even at that age has not been combined with needed public diplomacy that is compulsory for successful implementation of public policy.

As the president plots a new cabinet,some ministers will surely be reappointed.Fresh faces will surface.The challenge is how far the president can go to assemble a truly merit based team even if they must have political background.Any reward for loyalists should have competency as a strong benchmark.It is also helpful to have a monitoring and evaluation system to ease out failing ministers and encourage performing ones.A bit of target setting across the sectors can enable a tracking of performance.

A point to note is that political rewards can no longer supercede merit.It is also ludicrous to sponsor incompetent hands on the altar of political considerations.Other path for compensation can be worked out Unless the new cabinet is premised on merit,the legacy of the administration may be in jeopardy.