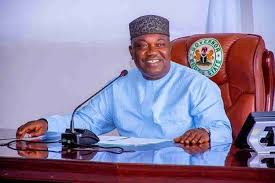 (AFRICAN EXAMINER) – Like many have said, before Ifeanyi Ugwuanyi became the governor of Enugu State, he had his mission and vision well defined and cut out. From the health sector, to security, road infrastructure and education among others, the former ranking member of the House of the House of Representatives already had well designed plans of what he wanted to do to positively impact his people and unlock uncommon developments in the state.

The governor, Gburugburu as he is fondly called, very well understands the place of education in any human setting.He understands that education is the life wire and the bedrock of the socio-political and economic development of any society.

It is clear to him that every modicum of development in any human society is a function of how educated the people are. So, like G.K Chesterton, Ugwuanyi believes that education is simply the soul of a society as it passes from one generation to another.

It is in the light of that conviction that the governor, since his inauguration on May 29, 2015, has not left any discerning mind in doubt about his preparedness to return education to its glorious days in the state. And he has been up and doing in that regard.

His impacts in the state’s education sector are so massive that I would only mention but a few of them in this write-up for lack of space.

Ugwuanyi is constantly reaffirming his commitment and belief in qualitative, accessible, affordable and inclusive education in the state. While commissioning some equipment and facilities’ repairs for teaching and learning in Technical Colleges and Special Science Schools in the state, he was reported to have said: “Our best investment is in education.”

It is not surprising that in the last two years, his administration has made concerted efforts, despite the prevailing economic recession, to rewrite the history of education in the state by deliberately improving the standard of learning through the implementation of far reaching reforms as embedded in his administration’s four-point agenda.

The result did not take time to materialise. Last year, the Federal Government, through the Federal Ministry of Education in a letter by the Director, Education Support Department, on behalf of the Minister of Education, Mallam Adamu Adamu, named Model Secondary School, Nsukka, as winner of the 2019 President’s Teachers & Schools Excellence Award.

The School, on October 5, 2019, emerged FG’s 2019 educational award winner of the prestigious national award, at the Eagle Square, Abuja. This followed general assessment of infrastructure, E-Library, quality teaching and learning in public secondary schools in Nigeria by the Federal Ministry of Education. That feat was possible because of the governor’s determination to reposition the standard of education in the state.

Since he became governor, his resolve to ensure that education is taken to a new height in Enugu State, has led to the recruitment of over 5000 primary and secondary school teachers; construction, renovation and equipment of 897 classroom blocks and other school projects under the Enugu State Universal Basic Education Board (ENSUBEB).

The state has also procured and distributed 22,150 lockers and 22,150 chairs for primary school children, as well as 1,228 tables, 1,228 arm chairs and 2,456 armless chairs for the teachers. It has also provided 1,130 marker boards for teaching and 1,960 ceiling fans just to make the learning environment very conducive.

Also, under the ENSUBEB, 12, 480 writing desks and chairs for primary school pupils and 868 tables and chairs for teachers, have been procured and distributed to improve the standard of learning.

To create jobs and make available more teaching staff to respond to teeming number of students in the state, the PPSMB has converted over 1000 volunteer teachers to permanent staff and released all outstanding arrears of teachers’ promotion in the state.

Irked by the ugly experience of the post-primary school teachers, most of whom have been denied promotion since 2013, even as most of them were approaching retirement, Ugwuanyi’s administration approved the release of the 2013 promotion arrears for the affected teachers with financial effect from April 2017.

The governor’s whirlwind in the state education sector did not stop at primary and secondary schools as the tertiary institutions are equally undergoing renovation and outright reconstruction in some cases.

Before Ugwuanyi came onboard, the Institute of Management and Technology (IMT), one of the nation’s pioneer leading lights in engineering and technology education, which had brought glory and accolades, not only to the state but also to the country in the past, was almost dead.

It  was barely living on its past glory as most of its courses were de-accredited by the supervising body, the National Board for Technical Education (NBTE), due to decay and lack of necessary facilities.

Ugwuanyi promptly reversed the ugly trend and positioned IMT on a fast developing pedestal by releasing a grant of N100 million to enable it to meet the accreditation needs of its courses. This was followed with massive provision of infrastructure, renovation of dilapidated buildings and facilities and other logistics needed to improve the quality of learning in the institute.

However, it is not surprising when IMT’s transition into a degree-awarding institution was announced. In partnership with the University of Nigeria Nsukka, IMT would henceforth, be awarding Bachelor’s Degrees in about five courses for a start. With Ugwuanyi’s support, IMT was also able to hold its convocation 11 years after the last one was held.

Aside IMT, there are numerous education transformational interventions in other state-owned tertiary institutions, like the Enugu State University of Science and Technology (ESUT); the Enugu State College of Education Technical (ESCET); and the Enugu State Polytechnic, Iwollo in Eziagu Local Government Area.

Ugwuanyi’s large-heartedness and magnanimous spirit equally reflected in the lives of some very intelligent but indigent students whose parents are so poor that they could not finance their education.

To this class of people, he provided a soft landing by offering them scholarships. About 680 indigent engineering students of the Enugu State Polytechnic, Iwollo and the IMT, Enugu have been offered scholarship by Ugwuanyi. The same scholarship awards were extended to 22 indigent undergraduates who are currently studying at Mewar University, India.

Even the Enugu West General Assembly (EWGA) noticed Ugwuanyi’s excellent performance in education sector, when it recently declared that his outstanding building blocks in education are quite glaring even to the blind.
Ugwuanyi, from all intent and purposes, seems to have aligned with Malcolm X, who sees education as a passport to the future; for tomorrow belongs to those who prepare for it today.