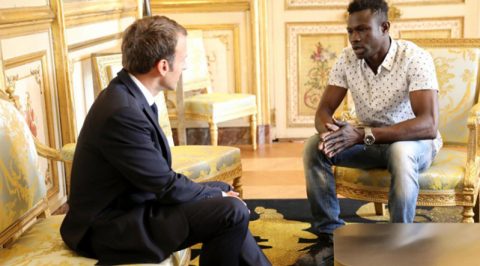 (AFRICAN EXAMINER) –  Mamoudou Gassama, 22, left Mali, to seek a better life in Europe. For this, he was willing to stake his life. He undertook the perilous journey of travelling by road, boarding an unsafe boat across the Mediterranean Sea into Italy and arriving in France where he had an uncertain future. He was one of the tens of thousands who leave Africa on  the  suicidal journey to Europe, and was of course, just a number.

At about 8pm on Saturday, May 26, while  walking on a street in northern Paris, he came across a crowd; people were shouting   and sounding horns. The gaze was towards a multi-storey building. He looked up, and there was a four-year old boy dangling from the balcony of the   fourth floor. The only thing stopping the child from plunging was a man leaning across from   a neigbouring  balcony, just merely able to hold on to the child.

Instinctively,  Gassama broke into a run. He scaled the façade of the first floor as the crowd cheered, he scaled the second, and then the third, hesitated for a slight second, scaled the fourth, jumped  into  the balcony and hauled the child to safety. The child had apparently injured himself before he was found dangling.

Gassama who said the boy was crying when he hauled him to safety, was to  reflect: “I just climbed up and thank God, God helped me. The more I climbed the more I had the courage to climb up higher, that’s it.”

He was not a Ninja, superman or spider man like some media have described him. He was just a human being who  knew something must be done fast or the boy would plunge to death: “I felt afraid when I saved the child (when) we went into the living room, I started to shake, I could hardly stand up, I had to sit down.”

Within a minute, the hitherto faceless   migrant  taught the world another lesson in selflessness and sacrifice, a point the Paris Mayor, Anne Hidalgo, emphasized when she phoned  him: “I told him that his heroic act is an example to all citizens and that the city of Paris will obviously be very keen to support him in his efforts to settle in France.”

Next day, he met French President Emmanuel Macron who thanked and offered him citizenship and a job in the Fire service. He reiterated before Macron that he was just an ordinary person who found himself in a situation: “I just didn’t have time to think, I ran across the road to go and save him.”

Gassama deserves all the accolades, rewards and much more; after surviving the travails of his journey from Africa,  and surviving the seas, he did not think twice before putting his life on the line to save  a child he did not know.

The story is the stuff fairytales are made. Gassama, a jobless migrant, walking past a particular street, at a precise time, instinctively coming to the rescue of a helpless child, redeeming the image of migrants in the consciousness of many, being received by the President of one of the most powerful countries in the world – when there might  have been no chance of him meeting the Malian President – getting automatic employment and citizenship and becoming famous across the world.

The religious would attribute all that to super natural forces. This may be so, but his act shows that when all is said and done, we are first human beings before we are white, black, European, Asian, African, indigenes or migrants. What is striking to me, is the humanity; at the time he broke free and scaled the floors, nobody including those in the streets egging him on and cheering, thought of colour, religion or status. All were united in seeing the child saved from a tragic death.

The speed with which France reacted and its leaders acted is quite impressive, and a lesson to  countries especially in the under developed world  who are mired in bureaucracy and self-importance.

Gassama once again, reminds humanity that heroes are not necessarily hunky fellows with super human strength and celestial powers; often, they are ordinary people, you meet on the streets.

Nigeria four years ago, produced such a being. The Ebola virus was sweeping through some African countries  leaving thousands of corpses in its wake. A Liberian, Patrick Sawyer flew into Lagos, showing signs of ill health. He was admitted into a private hospital. Sawyer, who had some diplomatic status, had lied that he had not been in touch with an Ebola victim, and demanded to be discharged so he could continue his journey to the port city of Calabar, some 750 kilometres from Lagos. Although Nigeria had not had an Ebola case, but the senior doctor, Stella Adadevoh  had a hunch, it could be. So when the international organization  that had brought Sawyer into the country insisted he must be discharged so that he could catch up with a conference, she refused.  She realized that Nigeria is a country of 180 million people, and that releasing a possible Ebola victim back into the megacity of Lagos with some 18 million people, could be quite disastrous. She also did not want to take the risk of transferring him to a specialist hospital with the risk of other people being affected, and without the hospital being prepared. Rather, she put the hospital in a lockdown to await test results, and  alert the authorities to activate the emergency services.

In the process, Dr. Adadevoh, contacted Ebola and on August 19, 2014, paid the supreme sacrifice. But by sacrificing her life, she and her colleagues, prevented what could have been one of the most devastating cases of the Ebola epidemic. Her actions gave the country the opportunity of certifying that Sawyer had Ebola, enough time to track all the passengers and crew that had flown in with Sawyer and all the third parties they might have been in contact with.

As a result, Nigeria had only twenty cases of Ebola with eight deaths. Within a short period, while Ebola was still devastating countries earlier affected, the World Health Organisation (WHO) certified Nigeria, Ebola-free.